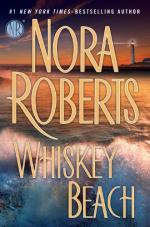 Nora Roberts
This Study Guide consists of approximately 21 pages of chapter summaries, quotes, character analysis, themes, and more - everything you need to sharpen your knowledge of Whiskey Beach.

The main legend in the story regards the story of the Calypso and Esmeralda’s Dowry.

“A lot of people believe Esmeralda’s Dowry exists. When treasure hunters found the wreck of the Calypso some thirty years ago, they didn’t find the dowry. Haven’t found it yet, and more have looked. Then again, there’s no solid, corroborated evidence the dowry was on the ship when it wrecked on Whiskey Beach, or was ever on it.” (Chap. 12, p. 184)

Eli learns more about Esmeralda’s Dowry. His ancestor, Violeta, became involved with a seaman. When her brother, Edwin, learned of the affair, he killed the seaman and Violeta ran off to Boston. Eli is able to corroborate the fact that Violeta was disowned by the Landons as a disgrace. Eli determines that his great-grandmother’s emerald and Bluff House were part of the dowry stolen...

More summaries and resources for teaching or studying Whiskey Beach.