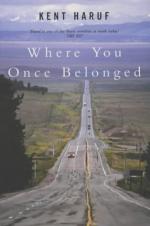 Where You Once Belonged: A Novel Summary & Study Guide

Kent Haruf
This Study Guide consists of approximately 24 pages of chapter summaries, quotes, character analysis, themes, and more - everything you need to sharpen your knowledge of Where You Once Belonged.

Where You Once Belonged: A Novel Summary & Study Guide Description

Where You Once Belonged: A Novel Summary & Study Guide includes comprehensive information and analysis to help you understand the book. This study guide contains the following sections:

This detailed literature summary also contains Topics for Discussion and a Free Quiz on Where You Once Belonged: A Novel by Kent Haruf.

Where You Once Belonged is a novel by award-winning author Kent Haruf. In this novel, Jack Burdette went from a football hero worshipped by everyone in the small town of Holt, Colorado to the most hated man in that same community. Jack disappeared eight years ago after stealing one hundred and fifty thousand dollars from the local grain elevator. Now he has returned to commit yet another crime against innocence that will leave a single man desperate for justice. Where You Once Belonged is a narrative with a brooding style that will leave the reader breathlessly anticipating more.

Jack Burdette drives into Holt, Colorado eight years after he disappeared and sits in his car for more than an hour before a local merchant recognizes him and calls the police. Jack is arrested even though he has committed no crime that he can be charged with. However, the anger of the town forces the sheriff's hand, causing him to keep Jack locked up until he can find something to charge him with.

Jack was a late child born to an alcoholic and his overly religious wife. Jack was a mediocre student who learned early in life to charm those around him. In high school, Jack became a football star. As a local sports hero, Jack got through school with the help of a beautiful young girl who was so in love with Jack she was willing to do anything for him, including most of his homework.

Before Jack's senior year of high school, his father was killed in a car accident as he made his way home from the bars late one December night. This caused Jack's mother to tighten her reign on Jack in the hopes of keeping him from becoming just like his father. In response, Jack got a job at the local grain elevator and moved out of his mother's house into a local boarding house. This created a fun spot for the local kids to hang out in, playing cards and drinking beer late on Sunday nights.

After high school, Jack went to college for a short time, but was quickly expelled for stealing another student's radio. Jack joined the Army and served several years before returning to Holt. Jack continued to work at the grain elevator and date local girl, Wanda Jo Evans. Wanda Jo had gotten Jack through high school by doing his homework and now did all of Jack's laundry in exchange for being his weekly date at the local bar. Wanda Jo held on for eight years, hoping Jack would one day ask her to marry him. When Jack was promoted to manager of the grain elevator, Wanda Jo thought her time had finally come.

One weekend, the board of directors at the grain elevator sent Jack to a grain conference in Oklahoma. Jack quickly became bored and found himself attracted to a young woman assigned to showing a film on hybrid grain at one of the many booths for the conference. Jack and this young woman spent several nights together and then got married. Everyone in Holt are shocked when Jack returns home with his new wife, but none as shocked at Wanda Jo Evans.

Over the next few years, Jack and his new wife, Jessie, have two sons. Then one December Jack disappears. Jessie becomes a target of hatred from the community of Holt, but she stays in town and struggles to repay what she sees as her debt to the community as word spreads that Jack stole one hundred fifty thousand dollars from the grain elevator. Jessie gives the elevator her house. A short time later, Jessie gives birth to a still born daughter. After this, the community stops torturing Jessie for her husband's misdeeds.

Eight years pass. Jessie begins to have an affair with an old friend of Jack's, Pat Arbuckle, the local newspaper owner. However, this affair ends when Jack suddenly returns to Holt and forces Jessie and their sons to leave town with him.

More summaries and resources for teaching or studying Where You Once Belonged: A Novel.

Where You Once Belonged: A Novel from BookRags. (c)2022 BookRags, Inc. All rights reserved.