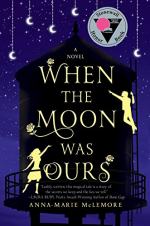 When the Moon Was Ours Summary & Study Guide

McLemore, Anna-Marie
This Study Guide consists of approximately 41 pages of chapter summaries, quotes, character analysis, themes, and more - everything you need to sharpen your knowledge of When the Moon Was Ours.

When the Moon Was Ours Summary & Study Guide Description

When the Moon Was Ours Summary & Study Guide includes comprehensive information and analysis to help you understand the book. This study guide contains the following sections:

This detailed literature summary also contains Quotes and a Free Quiz on When the Moon Was Ours by McLemore, Anna-Marie.

The following edition of this book was used to write this study guide: McLemore, Anna-Marie. When the Moon Was Ours. Thomas Dunne Books, 2016. Hardcover.

In an unnamed small town, a teenage girl named Miel and a teenage boy named Sam grew up as neighbors. Miel entered the town years earlier in a mysterious and public way: when the town congregated to knock down their old water tower, Miel was suddenly discovered among the water as it poured into an empty field. Miel also has mysterious roses that grow from an embedded stem in her wrist, whose purpose or origin is unknown. Miel was taken in by a young woman named Aracely, who is neighbors with Yasmin, the Pakistani single mother who raises Sam. After Miel and Sam grew up as friends and playmates, their relationship suddenly turns romantic as teenagers, as they passionately make love.

Sam works an after-school job at the Bonner pumpkin farm, which is run by Mr. Bonner. Mr. Bonner has four red-haired daughters -- from oldest to youngest: Chloe, Lian, Ivy and Peyton -- who all aggressively seduce and manipulate the boys in the town. One day, as Miel is cutting off a rose that had grown on her wrist into the town’s river, she sees Ivy crying. A few days later, Miel receives a phone call from Ivy, uncharacteristically inviting her over to the farm. When Miel arrives, the four sisters demand that she begin handing over each of the roses that grow on her wrist, before they snip off the one that is currently growing.

The next week, as the next rose is growing on Miel’s wrist, she cuts it off in private, without giving it to the Bonners. Later, Ivy invites her over to the farm to see something. Ivy shows Miel an ominous, above-ground, stained-glass coffin in a secluded corner of the Bonner farm. Suddenly, Lian and Peyton jump out and shove Miel into the coffin, locking her inside. Peyton eventually lets Miel out, but only after Miel lives through traumatic repressed memories about the abusive lengths her mother would go to in order to stop the roses on Miel’s wrist from growing.

One night, when Sam is going over to be with Miel, he and Aracely have an argument. In this argument, it is revealed to the reader that Aracely in fact used to be Leandro, Miel’s older brother, before Aracely was mysteriously transformed by a river into her current gender and appearance, which she believes properly suits her. Sam is in fact born a girl, with the full name of Samira, but is being raised as if he were a boy by Yasmin, in accordance with an obscure Pakistani tradition.

The Bonner sisters again summon Miel, this time now armed with the information of Sam/Samira’s true identity, which they learned from extorting the high school’s secretary, Emma Owens. Miel sinks into a depression, unsure of what to do next. One day, after Yasmin comes over and asks where Sam had gone, Miel goes to find him and discovers that Sam had dropped himself into the river, resigning his fate to the currents. Miel rescues him and, on the river banks, confesses her love for Sam, but he responds by saying she never allows herself to be truly vulnerable. Miel then sits all night by the river in sadness, and in the morning, Ivy takes her back to the stained-glass coffin, locking her inside it again. In the coffin, Miel once again realizes traumatic repressed memories from her childhood.

Sam, during his work on the Bonner farm, discovers Miel in the coffin, and her tenderly takes her out. They go back to Sam’s house, and begin cooking a traditional Spanish dish before getting distracted and making passionate love. Later, Sam goes to the Bonner farm and tells the first person he sees, Lian, that he quits. In a private conversation with his mother, Sam tells Yasmin that he actually feels completely comfortable as a boy, and intends to live his entire life as a boy/man. Meantime, Miel and Aracely have an intense argument about their family history, with Aracely finally revealing her past identity as Leandro.

After being summoned again to the Bonner farm, Miel and Ivy have an intense argument in the pumpkin fields, followed by Ivy suddenly ripping not just the rose but the entire stem out of Miel’s wrist, causing intense bleeding. Sam finds Miel stumbling around the forest and attempts to nurse her back to health. Suddenly, all four Bonner sisters arrive on the scene. Sam decides that he will stand up to the Bonner Sisters, and tells them about his newfound identity as a boy. As Sam says this, the nearby stained-glass coffin begins to break. Miel and the other Bonner sisters decide that they, too, will share the deepest truths about themselves. When Ivy, the last to go, finally reveals her truth, the stained-glass coffin shatters, and a truce is reached between Sam, Miel, and the sisters. The novel concludes with Sam and Miel passionately making love again, but with Sam confidently revealing his entire body to Miel for the first time.

More summaries and resources for teaching or studying When the Moon Was Ours.

When the Moon Was Ours from BookRags. (c)2022 BookRags, Inc. All rights reserved.