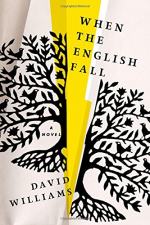 Williams, David
This Study Guide consists of approximately 55 pages of chapter summaries, quotes, character analysis, themes, and more - everything you need to sharpen your knowledge of When the English Fall.

When the English Fall Summary & Study Guide includes comprehensive information and analysis to help you understand the book. This study guide contains the following sections:

This detailed literature summary also contains Quotes and a Free Quiz on When the English Fall by Williams, David.

The following version of this book was used to create this study guide: Williams, David. When the English Fall. Algonquin Books, 2017. First Edition.

When the English Fall opens with a letter from Colonel Terrence Marker, an instructor at the U.S. Army War College to Dr. Jeanine Ernestine, a professor at the University of Pennsylvania. Colonel Marker’s letter says that he is sending Dr. Ernestine five journals that he found in an abandoned farmhouse in rural Pennsylvania. The main narrative of the novel is the content of these journals, which are narrated by Jacob, an Amish farmer.

The first entry describes Jacob holding his daughter Sadie as she suffers through a long seizure, in which she sees angels falling from the sky. Sadie has a reputation for being able to predict the future. Her vision turns out to be true, and a few nights later Jacob, his wife Hannah, Sadie, and his son Jacob all watch lights fall from the sky. This solar storm causes planes to crash, cars to malfunction, and technology to become useless. This does not affect the Amish, but the English -- the Amish term for non-Amish people -- are thrown into chaos.

Jacob hears rumors of growing unrest and devastation around the world. The Amish deacons have decided that spare food should be given to the English, and so some members of the Amish community ride into Lancaster with the National Guard to deliver the rations. They bring back stories of violence, fear, and starvation. Jacob begins to hear gunshots at night as people begin trying to break into farms and houses to steal food. Jacob’s English neighbors have begun forming small militias to protect the community, which worries Jacob. Over the course of two days, one of Jacob’s English neighbors kills himself, and there is an unidentified body discovered on the side of the road with a sign reading “LOOTER.”

A hurricane causes minor damage to the Amish settlement, but floods neighboring cities. Jacob’s English friend, Mike, arrives at his home along with his two sons and his ex-wife. Jacob agrees to shelter them, and they help him in the fields, and help Hannah in the house. Things among the English are worsening, and so the Amish community agrees that they must take care of Mike and his family. One night at dinner, Sadie has another seizure. The next day Jacob learns that the Stolfutz family, an Amish family, were killed by looters at the exact time of Sadie’s funeral. The husband, wife, and four of their six children were shot, and their house was ransacked. Jacob is deeply saddened by these murders, and by the fact that the violence of the English has reached his settlement.

Jacob’s English neighbors find and kill most of the men who murdered the Stolfutz family, but two escape. Those two men threaten Jacob and his family. Jacob gives them food, but the men plan to kill him and his family anyway. Right before they can do so, Mike’s son Derek shoots the two looters. One dies instantly, and the other dies over the course of an hour, as Sadie hums a lullaby to him. Sadie later tells a group of women that they all must leave the settlement and travel west. After much debating Jacob, and the majority of the community, agree to do so. If they remain where they are they will be sucked into violence, and so they would rather risk the danger of traveling to a new place in order to stay true to their Amish faith. The novel ends with Jacob deciding that he will leave behind his journals, as Sadie advised, because they contain bad memories that he wishes to move past.

More summaries and resources for teaching or studying When the English Fall.

When the English Fall from BookRags. (c)2022 BookRags, Inc. All rights reserved.