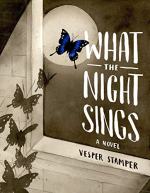 Vesper Stamper
This Study Guide consists of approximately 38 pages of chapter summaries, quotes, character analysis, themes, and more - everything you need to sharpen your knowledge of What the Night Sings.

What the Night Sings Summary & Study Guide includes comprehensive information and analysis to help you understand the book. This study guide contains the following sections:

This detailed literature summary also contains Quotes and a Free Quiz on What the Night Sings by Vesper Stamper.

The following version of this book was used to create this study guide: Stamper, Vesper. What the Night Sings. New York: Alfred A. Knopf, 2018.

Vesper Stamper’s illustrated graphical novel opens with the British liberation of Bergen-Belsen Concentration Camp after the Second World War in the spring of 1945. The survivors are weak, broken, and traumatized, and cannot believe that the camp has been liberated and that they are free at last. The novel’s heroine, 16-year-old Gerta Rausch, meets a fellow young survivor named Lev.

The novel then travels 10 years back in time to recount Gerta’s childhood leading up to the war. Before she and her papa were taken as prisoners, she did not even know they were Jewish. She grew up in Germany with her father, who played in an orchestra, and her stepmother, a glamorous Gentile named Maria, who was also her opera maestra. They lived an idyllic life of comfort, artistic fulfilment, and focused on their music. But when the Nazis take Gerta and her papa to Bahnhof Theresienstadt Concentration Camp, he explains to her that her mother died when she was a child in a fire caused by an anti-Jewish raid when they lived in Köhn. It was then that he moved them to Würzburg and they assumed the surname of Richter. When they arrive at the camp, Gerta works processing clothing in a store with a girl named Roza and her father is assigned to the musicians building. After a while, they are transferred to Auschwitz-Berkenau, where Gerta is assigned to the Women’s Orchestra as a violist and her beloved father is ruthlessly sent to the gas chambers.

At this point the novel returns to the liberated Bergen-Belsen camp, where Gerta had been transferred after her time in Auschwitz. Gerta and Lev become close friends and he begins writing letters to her about his past and his dreams for the future. Meanwhile, she begins a flirtatious relationship with a handsome young man named Michah, who is a staunch Zionist and plots the refugees’ immigration to Israel. Lev is a traditionally devout Jew and asks Gerta to marry him; she declines and insists they are too young to marry and that she wants to live a life as a musician with a string of lovers rather than a husband.

Her process of maturation and coming of age had been interrupted by the war and now she struggles to move forward as an orphan with no remaining family and no idea where she belongs. Furthermore, Gerta struggles to regain her voice after the war. Her vocal chords were damaged due to her deteriorated health as well as emotional trauma. She joins the camp’s musical society as a violist to feel close to her father’s memory, but Roza encourages her to keep practicing until her vocal chords heal and she regains the courage to sing. Along with the rest of the survivors on the displaced persons camp—where the majority of the novel takes place—she gradually starts to regain her physical strength. As her body heals, she gets her period again, her hair starts to grow back, and she takes pleasure in wearing feminine clothing, after years of being shaved, uniformed and stripped of her identity.

Until this point, she had rejected her Jewish heritage and faith, as it was a part of her that she only discovered in the context of the horrors of the Holocaust. But with the encouragement of others on the camp and with the influence of Lev she slowly learns about Judaism. In one poignant scene she participates in a cleansing bathing ritual and feels a wave of peace and clarity. She realizes that she has come to love Lev and they get married in a beautiful ceremony on the camp. Together they join the group led by Michah leaving for Israel. They travel by foot across Europe and then board a ship for the British mandate of Palestine. After harsh travels they reach the shore and begin a new life on a farming commune (a kibbutz) with a long-lost aunt of Gerta’s named Ruth. The refugees find solace and healing in this new life that they have forged for themselves and Gerta grows in her faith and her marriage. Lev fulfils his career aspirations by starting a newspaper and Gerta is accepted to the Tel Aviv Conservatory, where she will complete her training as an opera singer. The novel concludes with a sense of hope and fulfilled prophesy, bringing the story to a close with a testament to the power of healing, love, and freedom.

More summaries and resources for teaching or studying What the Night Sings.

What the Night Sings from BookRags. (c)2022 BookRags, Inc. All rights reserved.