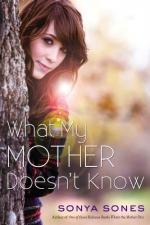 Sonya Sones
This Study Guide consists of approximately 30 pages of chapter summaries, quotes, character analysis, themes, and more - everything you need to sharpen your knowledge of What My Mother Doesn't Know.

What My Mother Doesn't Know Summary & Study Guide includes comprehensive information and analysis to help you understand the book. This study guide contains the following sections:

This detailed literature summary also contains Quotes and a Free Quiz on What My Mother Doesn't Know by Sonya Sones.

"What My Mother Doesn't Know" is a young adult novel written by Sonya Sones and published in 2001. It details the experiences of fourteen year-old freshman Sophie Stein as she attempts to find not only a boyfriend, but also her self-discovery in the process.

When the novel begins, Sophie is hopelessly in love with Dylan, and can't get enough of him. The attraction is very physical, and Sophie, very insecure, attempts to conform to all of Dylan's wishes. But slowly, their relationship begins to flicker out, and Sophie finds herself drawn to an unknown male online named Chaz, with whom she connects on a very emotional basis. At the same time, she is oddly attracted to an ugly, skinny, loner named Murphy, who is an incredible artist. Ultimately, Sophie breaks up with Dylan.

Ultimately, Chaz turns out to be a sexual pervert, and Sophie breaks things off with him immediately. In the meantime, she grows closer to Murphy, with whom she connects on a personal and emotional level. They grow closer and closer, until they come to fall for each other. Love ultimately blooms, and Sophie decides that Murphy is the one she wants, because he knows who she really is, and he loves her for that. She, likewise, sees wonderful things in Murphy that no one else does. And the novel ends with them staying together, no matter what anyone else in school thinks.

More summaries and resources for teaching or studying What My Mother Doesn't Know.

What My Mother Doesn't Know from BookRags. (c)2022 BookRags, Inc. All rights reserved.