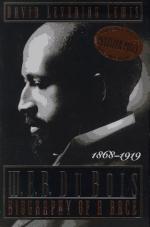 David Levering Lewis
This Study Guide consists of approximately 62 pages of chapter summaries, quotes, character analysis, themes, and more - everything you need to sharpen your knowledge of W. E. B. Du Bois, 1868-1919.

W. E. B. Du Bois, 1868-1919: Biography of a Race Summary & Study Guide includes comprehensive information and analysis to help you understand the book. This study guide contains the following sections:

This detailed literature summary also contains Topics for Discussion on W. E. B. Du Bois, 1868-1919: Biography of a Race by David Levering Lewis.

This biography, published in 1993, concerns the life of William Edward Burghardt Du Bois from his birth in 1868 through the year 1919 with just a foreshadowing of his death in 1963. The book also serves as a valuable history lesson, explaining how many contemporary social movements came to be.

W.E.B. Du Bois's father, Alfred, abandons his mother when Willie (as he was called for short) is about three years old. His mother, Mary, raises him in Great Barrington MA, a mid-sized town where many free African American farming families mix with Whites.

A promising student, Du Bois flies through his primary school studies while living with his handicapped mother in very disadvantaged conditions. A helpful high school principal encourages him to try to get into college and others in the community help him buy books for a college preparatory study course. Du Bois begins to write for local magazines and meets and is impressed by his paternal grandfather a sophisticated mulatto man named Alexander. Du Bois's mother dies just in time for him to leave Great Barrington and attend Fisk University.

At this liberal arts school in the South, Du Bois meets intelligent and talented lifelong friends. He excels in college and earns money teaching poor black farming families during the summers. Du Bois's graduation speech receives great applause and thanks to winning a scholarship, he is able to go to Harvard in 1888. Although not very popular with other students and too poor to engage in their social activities, Du Bois enjoys himself. Harvard puts him in touch with thinkers like William James, an early philosopher and the founder of the modern study of psychology. Once he earns a Master's degree in sociology, Du Bois sets his sighs on a PhD. He earns the money he needs to continue his education by writing insistent letters to Rutherford B. Hayes, who is in charge of distributing money from the Slater Fund, a cash award earmarked to send promising Black people to Europe to get a higher education. Du Bois, who now goes by W.E.B. instead of Willie, wins the money.

The school Du Bois chooses is Berlin University, a college where leading thinkers are developing revolutionary ideas, such as Marxism. Du Bois studies hard and backpacks around Europe but runs out of money before his PhD is technically granted. He returns home on a cheap boat and manages to get Harvard to award him a PhD for his thesis paper. He soon finds that it is difficult for even a very educated black man to find a suitable job. He settles for a position at Wilberforce University. The school is too religious for him, and the students aren't particularly ambitious. However, it is here that he meets his future wife, Nina. They marry, and soon Du Bois takes a job studying the problems of African Americans in Philadelphia's 7th Ward.

The detailed study he produces revolutionizes social science. Du Bois is then offered a job at a much better college, Atlanta University, where he completes important long-term studies of the African American life and racism in America. Du Bois and his wife have a son, but the child dies at age three. The couple grows apart as Du Bois works around the clock and travels. Nina is left to live in Atlanta, a town very hot with racism at the time. Du Bois has made it his life mission to fight for civil rights and improve educational opportunities for African Americans so that the most talented blacks can lead the race to achieve their highest goals. Booker T. Washington, however, has made compromises with wealthy white financial donors and politicians to encourage black people to ask for nothing more than basic education and economic freedom. Money pours into Washington's Tuskegee University from these people. The President and influential white and African American people make it a habit to consult Washington for his opinion on every matter. Du Bois considers going to work for Washington at Tuskegee until Washington's jealousy of Du Bois's rising fame leads him to begin undercutting Du Bois's efforts. Around this time Du Bois has a second child, a daughter named Yolande.

Du Bois publishes a stunning book called The Souls of Black Folk. In 14 essays and beautiful fictional stories he brings a new awareness to the rights of black people and their experience of the white world. Du Bois becomes nationally famous and is soon requested as a speaker, author and conference organizer. Racial issues in America grow more desperate as the job competition heats up, unions form and the price of cotton goes down leaving farm workers in the South desperately poor. Whites in the South are encouraged by their leaders to fear African American competition by labor unions and political leaders hoping to control them, according to the author of this biography, Lewis. Lynching, discriminatory laws and mob violence is on the rise. To answer the need for equal rights, Du Bois invites intelligent black thinkers to Niagara Falls on the Canadian side to discuss solutions. The Niagaraites, as they are called, vow to work together to improve conditions. Washington is not a part of the group, but starts his own labor organization. While agreeing with racist whites in public, he secretly funds court battles for civil rights. Du Bois and Washington become locked in a lifelong feud.

In 1908 Du Bois leaves Atlanta University to become the editor of a magazine called The Crisis that supports the new NAACP. The NAACP is founded by white reformers who are fed up with the rising violence and most of whom disagree with Booker T. Washington's appeasement approach. The publication features controversial studies and arguments and soon gains huge popularity around the world. In The Crisis, Du Bois shows that the new so-called science showing blacks are an inferior race is false. He points out the achievements of great African Americans, condemns racial violence and narrow thinking on the part of reformers who only want a little freedom or a little education for blacks, and even criticizes the actions of political leaders, especially those who do nothing to stop growing violence.

Newspapers agree with Washington and his coworker Emmett Scott, who write angry, critical articles of The Crisis. In the meantime, radical reformers such as Monroe Trotter attack Washington's positions in public. Du Bois uses his power at The Crisis to sway people to vote for the Democratic presidential candidate, Woodrow Wilson, although he will later regret this. He fights against the movie The Birth of A Nation, which depicts blacks as dangerous rapists, and leads to violence against African Americans. He makes many attacks on Washington's way of ignoring problems. He scolds the white women who are fighting for the right to vote for not including black women in their group, but he also believes in women's rights and works closely and respectfully with many white and black women during his career.

Du Bois is not as fair to his own family. He seldom sees his daughter but eventually insists his daughter should go to school in England. When Nina and his daughter Yolande arrive, World War I breaks out. Du Bois is having affairs with various women, according to Lewis, but he continues to support his family with large sums of money. Eventually the not-very-talented Yolande is sent back home to America.

The NAACP goes through many growing pains. The African Americans feel they should be at least equally represented on the governing board, but the whites have trouble giving up the control they are used to. Throughout all the squabbling, Du Bois always manages to keep complete power over The Crisis.

When Washington dies, Du Bois becomes the most influential African American in the world. Many in the government do not like Du Bois's bold attacks on the president and the military, and military intelligence starts to investigate him and the NAACP to see if the organization should be stopped. When a friend named Joel Spingarn gets a government job, he suggests that Du Bois should support a new training camp for black military officers, take a job with the government and stop writing such controversial articles. Du Bois agrees to do this. He believes World War I will mean the end of White European power over blacks. He feels that if African Americans become high ranking officials in the military they will gain power and respect. Du Bois does encourage African Americans to sign up for the military, but soon it is announced that no high level appointments will be given to black soldiers. Also, the job offer is withdrawn. Du Bois loses popularity with many who feel African Americans should not join the war effort. The book ends after the WWI when Du Bois goes to Europe and becomes a leading voice in something called the Pan African movement.

Throughout the book Lewis shows how Du Bois's ideas change, and how his writings change the world. First he is a Victorian type man who thinks that smart people working hard will be treated fairly. Then he sees poor Southern blacks who haven't had his advantages and will never be treated fairly, and he fights to help them. He still believes only a few smart people will lead the others, but becomes frustrated with the lack of educational opportunities for such people. As he studies the facts and learns about Marxism, he begins to see that economics, not just evil intentions, drive racism. He grows angrier about violence and those who pretend to help the black people but only want to go so far. This book says that eventually Du Bois will become a Marxist leader of the Pan African movement and will move to Africa to live and die.

The following summary will use the words black, Negro, African American and colored because these different words are used in the book itself to describe people whose ancestors hail from Africa within the past 100 thousand years or so. This document will not use a very offensive racial term often used by Du Bois to show outrage, but will replace this racist word with "N—."