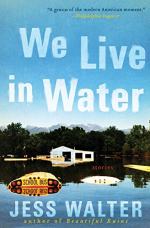 Plot Summary
+Chapters Summary and Analysis
“Anything Helps” and “We Live in Water”
“Thief,” “Can a Corn,” and “Virgo”
“Helpless Little Things,” “Please,” and “Don’t Eat Cat”
“The New Frontier” and “The Brakes”
“The Wolf and the Wild,” “Wheelbarrow Kings,” and “Statistical for My Hometown of Spokane, Washington”
Free Quiz
Characters
Symbols and Symbolism
Settings
Themes and Motifs
Styles
Quotes
Order our We Live in Water Study Guide

Related Topics
The Financial Lives of the Poets
The Cold Millions

We Live in Water Characters

Jess Walter
This Study Guide consists of approximately 37 pages of chapter summaries, quotes, character analysis, themes, and more - everything you need to sharpen your knowledge of We Live in Water.

Wayne “Bit” Bittinger is the protagonist of “Anything helps.” He is a recovering drug and alcohol addict who has been unable to remain sober for any sustained period of time. His girlfriend, Julie, was also an addict, and she is now deceased. Due to Wayne’s homelessness and addictions, he has lost custody of his son, Nate, who now lives in a foster home. Despite setbacks, Wayne remains committed to one day staying sober and regaining custody of Nate

Oren Dessens – “We Live in Water”

Oren Dessens is the main character in the 1958 storyline of “We Live in Water.” He is a World War Two veteran. He is divorced, and he has custody of his son. One day, Oren has sex with the wife of Ralph Bannen, a violent organized criminal. Before Bannen kills Oren, Oren makes his friend Flett promise to maintain the...

More summaries and resources for teaching or studying We Live in Water.

We Live in Water from BookRags. (c)2022 BookRags, Inc. All rights reserved.