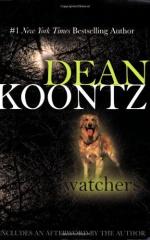 Dean Koontz
This Study Guide consists of approximately 51 pages of chapter summaries, quotes, character analysis, themes, and more - everything you need to sharpen your knowledge of Watchers.

This detailed literature summary also contains Topics for Discussion and a Free Quiz on Watchers by Dean Koontz.

Watchers by Dean Koontz is a poignant story that explores a secret wish of every dog owner throughout the world, having a dog that is as intelligent as a human. Travis Cornell goes out into the woods to recapture some of the joy of life he once knew as a small child. He finds a dog who, with his intelligence and warmth, gives him a new reason to embrace life. Einstein literally and figuratively saves Travis's life within minutes of meeting him and soon Travis finds himself in a position to return the favor. Watchers is about loyalty, love, and morality, a novel that will leave even cat lovers with a smile on their faces.

Travis Cornell is walking through the woods where he once spent time when he was a child, hoping to recapture that feeling of joy at simply being alive. Just as Travis is about to enter a dark part of the woods, a dog suddenly appears. This dog does not want Travis to continue into the darkness. After fighting the dog, Travis suddenly realizes there is something sinister in the woods, and he decides to call it a day. Travis takes the dog with him, assuming that because it has no tags, the dog has no owner. Travis notices odd things about the dog throughout the day. That night, he finally realizes the dog is as intelligent as he is.

A few days later, Travis and the dog, Einstein, are walking through the park. Einstein breaks away from Travis to the side of a strange woman. At first, Travis thinks Einstein is reacting to the woman in a way any normal dog might, but then realizes the woman is upset. Travis and Einstein's presence scares off the woman's companion, and she tells them she is okay. Travis takes Einstein home. However, Einstein disagrees with Travis's assessment of the situation and coaxes Travis into going to the woman's home. Travis and Einstein arrive at the home just in time to catch the woman's companion attacking her. Einstein saves the day by trapping the man in the kitchen while Travis calls the police.

Travis and this woman, Nora, become friends, spending a great deal of time together over the next few months. Travis lets Einstein show his intelligence to Nora at his own pace. When Nora knows, she decides they need to find a way to communicate with the dog. Nora shows the dog a lot of pictures and has him chose some that have meaning to him. In order to answer questions about the pictures, Nora has the dog wag his tail for yes and bark once for no. Soon, Nora and Travis learn that Einstein once lived in a lab and that he escaped somehow. They also learn that some other creature, one that Einstein is afraid of, also escaped.

This other creature, The Outsider, is a creature that was designed to kill. The Outsider is loose and intent on finding the dog in order to kill him. Lem Johnson, a member of the NSA, is searching for both animals. When a man is killed in the canyons near where Travis found Einstein, Lem is called in. Immediately, Lem knows the killer is The Outsider. Several other attacks take place over the next few months, leading Lem to the Santa Barbara area. Lem is frustrated with his inability to catch the creature.

Another man, Vince Nasco, also is looking for Einstein. Vince is a hired killer who was hired to kill all the scientists from Banodyne who helped create both Einstein and The Outsider. Vince is psychotic, believing that every person he kills leads him closer to immortality. Vince has decided that having the dog will help him make a large amount of money from the government. Both Vince and Lem hear about an attack on Travis's landlord that reveals to them that Travis has the dog. Now Travis and Nora, as well as Einstein, have gone on the run.

Travis and Nora change their names and move around for a short time. However, they decide they need to stay in one place and make a stand against The Outsider or else they will be running all their lives. Immediately after settling down outside of Carmel, Travis and Nora learn they are having a baby. This joyous news is tarnished when Einstein, who never had his shots, comes down with distemper. Travis is afraid that Einstein will suffer brain damage and lose his intelligence. However, Einstein survives with no lasting effects.

Shortly after Einstein's illness, Vince locates Nora and Travis. Vince kidnaps Nora outside her doctor's office and forces her to drive him back to the house she shares with Travis and Einstein. Once there, Nora manages to get a gun and shoot Vince, but he is wearing a vest and not injured. Travis chases Vince and manages to kill him before he can hurt Einstein. However, while Nora is treating Travis's wounds, The Outsider arrives. The Outsider manages to get Einstein, but Travis wounds him and is able to corner him in the barn. Travis kills him.

Shortly after the fight with The Outsider, Lem finds Travis and Nora. Travis tries to convince Lem that Einstein was killed by The Outsider, but Lem knows this is not true. However, Lem decides to keep this knowledge to himself and report to his bosses that Einstein and The Outsider are both gone. Everything is resolved happily, even for Einstein who takes a mate and has puppies that are also intelligent.

More summaries and resources for teaching or studying Watchers.