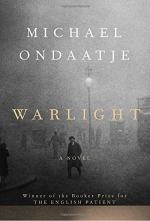 Michael Ondaatje
This Study Guide consists of approximately 38 pages of chapter summaries, quotes, character analysis, themes, and more - everything you need to sharpen your knowledge of Warlight.

This detailed literature summary also contains Quotes and a Free Quiz on Warlight by Michael Ondaatje.

The following version of this book was used to create this study guide: Ondaatje, Michael. Warlight. New York: Alfred A. Knopf, 2018.

The novel is narrated by Nathaniel as he looks back upon the events of his life and other people’s lives. In 1945, Nathaniel was 14 years old, and his sister Rachel was almost 16. They were living in London. Their father left the country to do corporate work in Singapore for a year. Soon after, their mother, Rose, left as well, supposedly to reside with their father in Singapore. Nathaniel and Rachel were left in the care of Walter, a friend of Rose. Nathaniel and Rachel referred to Walter as The Moth due to his quiet demeanor. The Moth worked as a supervisor at a banquet hall, but he also appeared to be involved in some crime. The Moth was close friends with a professional criminal called The Darter, who often visited The Moth at Nathaniel and Rachel’s home.

The Darter became like a secondary guardian to Nathaniel and Rachel. The Darter dated a woman named Olive Lawrence, who was a professional ethnographer. Nathaniel was highly impressed by Olive’s beauty, poise, and intelligence, and he even developed some romantic feelings. However, Olive eventually ended her relationship with The Darter and moved away. About a year after Nathaniel’s parents’ departure, there had strangely been no correspondence from them, and no sign that they were returning. Nathaniel soon began dating a young woman who called herself Agnes, although it seemed that that was likely not her real name. Nathaniel also began working for The Darter, helping him illegally smuggle racing dogs into London.

A man named Arthur Cash began to regularly visit Nathaniel and Rachel’s home, and Nathaniel assumed that Arthur was a friend of The Moth. One day, a group of strangers attacked The Moth and tired to kidnap Nathaniel and Rachel. Arthur McCash managed to save Nathaniel and Rachel, but The Moth died from his injuries. Nathaniel’s mother Rose, having returned to London, explained that both during and after World War Two, she had worked as a spy for the British government. The attackers had been foreign operatives seeking revenge on Rose. Rachel developed a grudge against Rose. Rose moved to the small village in Suffolk where she had lived as a child, and Nathaniel visited her whenever he was on break from his new boarding school.

As an adult in his late twenties, Nathaniel took a job working at a government archive office. His job was to alter and/or redact all files relating to British espionage both during and after World War Two. Rose had been murdered in Suffolk by a foreign operative ten years earlier. Rachel, still holding a grudge against her mother, had not attended the funeral. As an adult, Rachel had a son and named it Walter, after The Moth. Rachel had loved The Moth like a father, and she blamed Rose for The Moth’s death. Through government files, Nathaniel learned that Rose’s espionage work had enabled many aggressive, covert military actions by the British both during and after World War Two. Nathaniel also deduced that Rose likely had had an affair with fellow agent Marsh Felon. One day, Nathaniel decided to track down The Darter. He discovered that The Darter and Agnes had fallen in love, married, and had a child together. At the end of the novel, Nathaniel resides by himself in the same Suffolk village where his mother had lived.

More summaries and resources for teaching or studying Warlight.