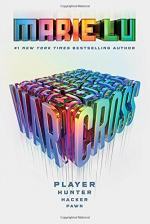 This detailed literature summary also contains Quotes and a Free Quiz on Warcross by Marie Lu.

The following version of this book was used to create the guide: Lu, Marie. Warcross. Penguin Random House, 2017.

Marie Lu's novel Warcross is divided into 31 chapters, charting the course of how the protagonist got involved in the Warcross Championship to the Championship's completion. The novel follows 18-year-old Emika Chen from the Bronx to Tokyo. She is the novel's first-person narrator.

Lu begins the novel by following Emika on essentially what is a typical day in her life. Worried about paying her rent and faced with an eviction notice, Emika works as a bounty hunter in order to earn the reward associated with her bounty. Emika worries a great deal about her debts because she remembers how her father struggled to pay off his gambling debts before he died. Due to the recent spike in crime in NYC, Emika has little trouble finding bounties but faces stiff competition from other bounty hunters. She loses her bounty for the day and returns home to play the virtual reality game Warcross with her roommate Keira who is unemployed. Keira struggles to find a job and prefers to play Warcross all day. While they are watching the opening ceremony of the Warcross Championship, Emika accidentally enters the arena as a player when she tries to steal a Powerup from one of the players.

Her action causes a huge media uproar because Warcross is generally considered to be unhackable. The creator of the game Hideo Tanaka contacts Emika and flies her out for a job interview with him. He reveals that she is actually not the only person to hack Warcross- there is another, more sinister hacker named Zero who seems to be trying to sabotage the games. Hideo hires Emika to find him, in addition to two other bounty hunters, for a 10-million-dollar bounty. He pays off all her debts and enters her as a wild card in the Wardraft.

At the Wardraft, Emika is the first pick, shocking everyone again. Asher Wing, captain of Team Phoenix Riders, chooses her and Ren to be the team's Architect and Fighter respectively. She also notices Zero's shadowy figure in the stadium, screenshots him, and shows Hideo. The team attends a club outing where Hideo and Emika talk for a few moments, spurring tabloid rumors that they might be an item soon. The team trains together as Emika, suspicious of Ren, tries to hack his information and follows him. Ren goes to the Dark World where he and others communicate with Zero via gambling bids and Emika realizes that Zero's plan is of a global scale. Emika also worries that Ren and/or Zero may be suspicious of her.

She and Hideo meet to discuss what Emika found so far, and Hideo takes Emika to dinner. They agree to meet again after the first Warcross Championship game and keep in touch until then. Team Phoenix Riders wins their first game against Team Demon Brigade, and Emika proves herself to be a very valuable asset to the team. Just after they win, an attempt is made on Hideo's life and Emika just manages to warn him. During the game, she downloaded some information from Ren and one of the files' titles leads her to realize that Hideo's life is in danger. The official story is that there was an electrical malfunction and the team goes out for karaoke to celebrate. Emika sneaks away to try to convince Hideo to be more careful. He shows her his new invention - a Link that allows the users to communicate telepathically and the two kiss.

Emika's team wins against the Stormchasers and Ren plays a song for Emika, leading her to realize that both he and Zero know who she is and what she is doing. Hideo takes Emika to meet his parents at dinner at their home and tells Emika about his younger brother's disappearance. During the next game, the Phoenix Riders narrowly beat the Cloud Knights by a millisecond thanks to Hammie. Emika spends the entire game distracted by Ren and follows him accidentally into the Dark World. There, Zero offers to have her join his side, while Emika's avatar flails unhelpfully in the game. Emika rebuffs Zero's offer, and he then broadcasts her kiss with Hideo at his parents’ house for everyone in the stadium to see.

Emika's teammates are furious and demand an explanation. Zero deletes all of Emika's Memories of her father just before an explosion rips through the dorm. Ren is taken in for questioning and both he and Emika are expelled from Team Phoenix Riders. Hideo visits Emika, panicked and vulnerable because he was worried about her. He gives her the 10-million-dollar bounty to get her to stop going after Zero but Emika protests that she wants to catch Zero. Tremaine, one of the players on Demon Brigade, reveals that he is one of the other bounty hunters and sends Emika a Memory that will help her. The Memory shows her that Zero and Ren suspected her almost immediately as well as Zero's plan for the final game: to rig the Artifacts of each team to send a virus to every user at the end. Emika goes to the Dark World and buys several illegal Power-ups with the help of Team Phoenix Riders.

In the final game of the Warcross Championship between Team Phoenix Riders and Team Andromeda, Emika glitches herself into the game. Just as Emika is about to reach the other team's captain Shahira and grab her Artifact, Shahira freezes her and reveals that she is really Zero. Just as Emika hacked Brennar's avatar, so too did Zero hack Shahira's. Emika just barely manages to win the game and grab the other team's Artifact. Zero turns to her in dismay, saying that he was trying to stop Hideo. Emika confronts Hideo about what Zero said and he shows Emika his plan: to use the NeuroLink to control user's minds and stop them from doing bad things, like holding up a liquor store.

Emika and Hideo disagree about what he is doing and she returns to the team. After talking with the team, Emika goes through her Memories and finds Zero during the final game, with his data exposed. The name associated with his account shocks everyone: Sasuke Tanaka, the lost younger brother of Hideo. Later, Emika receives a message from Zero offering to give her Memories of her father back if she joins him. Tremaine tells Emika that he contacted another bounty hunter and asks if she wants to work to stop Hideo or Zero. Emika doesn't make a decision just then, leaving the book on a cliffhanger, though it can be inferred that she will likely join Zero's team and work against Hideo now.