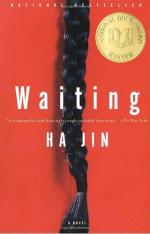 This detailed literature summary also contains Topics for Discussion and a Free Quiz on Waiting by Ha Jin.

Waiting is a story of love in limbo and the lives it leaves on hold as Lin Kong, a doctor in the Chinese Army, battles cultural forces and his own uncertain heart in a quest for love's fulfillment.

As a twenty-seven-year old military medical student in 1962, under heavy pressure from his ailing mother and his father, Lin agrees to an arranged marriage. When he returns home to meet Shuyu, the girl his parents have chosen, he is horrified. Although she is a year younger than he is, she looks much older and Lin finds her singularly unattractive. As a young man in a China moving toward the Cultural Revolution, he is particularly repelled by her bound feet, an old-fashioned custom acceptable in his small village but mocked by his contemporaries in Shenyang City. Lin feels Shuyu is completely inappropriate and begs his parents to break the engagement, but they are adamant and he capitulates out of a sense of duty.

In the twenty years that follow, Lin is so ashamed of Shuyu that he never allows her to visit him at the military hospital in Muji City where he works. Lin sees Shuyu for only ten days each year, during his summer leave. Three years after their marriage, their daughter, Hua, is born, and Lin decides to remain sexually separate from his wife, even during his annual visit. He never sleeps with her again, yet Shuyu remains devoted, unquestioning, and uncomplaining, taking care of his parents and raising their daughter alone. Lin does not hate her, but he does not love her, and does not know what to do about the situation. He tries to treat her with the respect and kindness as one would a family member, but is physically and emotionally absent from his marriage.

In 1964, student Manna Wu comes to the hospital where Lin works as a doctor and teaches anatomy at the nursing school. Manna first becomes involved with young officer Mai Dong. She loves him but is hesitant to accept his marriage proposal at the time, as she is uncertain where she will be stationed after her graduation. She turns to her teacher, Lin, for advice, and he agrees it would be unwise to marry before graduating. Manna refuses to marry Mai Dong before his transfer to a distant location and he later breaks off their relationship, taking another woman as his wife.

Manna considers Lin a friend and their relationship develops. By 1967, Lin and the twenty-eight-year-old Manna have professed their love for each other, but they are cautious and proper. Affairs between military personnel are strictly forbidden and men and women are not even allowed to walk together outside the compound. Censure by party members will mean punishment and possibly the end of their careers.

By 1970, Manna is tired of waiting and Lin decides to end his marriage. For the next 13 years, he returns every summer as usual to Goose Village and asks Shuyu for a divorce. She always agrees and then reverses herself when they go to court. There is an unwritten rule that a man may divorce his wife without her consent after 18 years of sexual separation, and in 1984, Lin finally brings Shuyu to Muji City and divorces her. Lin marries Manna, they have twins, and Shuyu settles in the city with Hua.

Surprisingly, Lin achieves his goal only to begin finding Shuyu suddenly much more attractive and his relationship with Manna much more stifling. By the end of the book, Shuyu is happily certain he will one day return to her and Lin is once again wavering between two women; his own heart's desire is still an unsolved mystery.