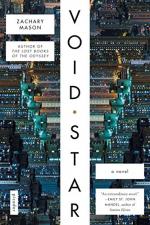 Zachary Mason
This Study Guide consists of approximately 68 pages of chapter summaries, quotes, character analysis, themes, and more - everything you need to sharpen your knowledge of Void Star.

The following version of this book was used to create this study guide: Mason, Zachary. Void Star. Farrar, Straus and Giroux, 2017.

The novel is made of interweaving chapters that center on the perspectives of three main characters, Irina, Kern, and Thales. Since the chapters vary in length, this plot summary condenses the chapters according to characters' experiences. The events described here may appear in a somewhat different order in the novel. Irina, a lead AI expert, arrives on an airplane to San Francisco to meet with Mr. Cromwell, the head of Water & Power. She has a memory implant that allows her to record and revisit memories in great detail. Cromwell tells Irina that he has been having trouble with one of his financial AI's and is seeking her expertise to find out what it may be. Meanwhile, Kern, a criminal for hire, is skillfully jumping through the rooftops of favelas in San Francisco, looking for his mark, a man with a targeted cellphone he must steal. He has a surgery that allows his legs to jump in great bounds. Thales is a young man from a wealthy Brazilian family who recently came to Los Angeles to live with his mother and brothers after his father, a Brazilian politician, was assassinated. He collapses and blacks out while he was visiting a tunnel in a Santa Monica beach with his brother Helios. When he wakes up, a surgeon tells him that he is having problems with his memory implant.

Irina inspects Cromwell's AI by watching a projection of its thoughts. She realizes that the AI is hiding something much larger beneath itself. In one of her fugues, she sees a woman driving a car and feels as if she is being watched. When she tells Cromwell's associates what she saw, she is dismissed. Kern finds his mark and beats him up in order to wrestle the phone from him. He fears that the mark may have died. Returning home, he plays a game on a found laptop called Void Star. The game ends by leading him to all the virtual libraries in the world. Thales visits his surgeon frequently for updates on his health. The surgeon shows him video recordings on a tablet of a woman in a movie theater and a conversation between a dying man and a woman. Thales wonders why he is being assessed by the surgeon and becomes suspicious of his motives. One day as he leaves the clinic and arrives at his hotel, St. Mark, a ragged woman stops him and tells them that she too has a memory implant and that he should be wary not to trust others. The woman is removed by the hotel staff.

Irina reviews her memories of her conversation with Cromwell and discovers coordinates and a strange name reflected on his glasses from his laptop screen. She decides to follow the coordinates and finds a series of underground tunnels that span the entirety of the city of San Francisco. She sees graffiti by a man named LEdERER and looks him up online later when she returns home. She discovers that LEdERER also has a series of photography, some of which include images from her and her friends' memories. She wonders if her memories are being hacked. Kern is being pursued by SFPD one day and begins to run. Suddenly, he receives a phone call on the mark's cellphone from a woman who says that she can lead him out from danger if she follows what she says. He chooses to trust her, changes his clothes, and goes to Credit Nuage to pull out money and buy a plane ticket. She tells him that she is trapped in a room in Los Angeles with no access to the outside world except through this phone line to Kern's phone. She asks that he come save her. Thales is suspicious of the events that surround him and feels as if he is being followed. That evening, after a strange dream, he goes to his mother's hotel room and realizes that she is gone.

Irina is invited to dinner by Cromwell at a secret and luxurious restaurant. In order to find the location, Irina hacks some of the technology in the proximity to make an estimate on where it is. She finds it and Cromwell tells here that he is willing to pay for her Mayo Clinic, and buy her a house, if she were willing to give him her memories. She is appalled and shuts down electricity to the entire building using her memory implant's wireless. She also disables his phone. She is on the lam and seeks help from her old friend Philip, but then receives a phone call from her friend Constantin's family to visit his estate in Patmos. Meanwhile, Kern tries to find out the identity of the ghost, the woman caller. He thinks that her name is Akemi and that she is the girlfriend of a fighter who is going to fight in Taiwan. When he finds her, she says she has no memory of him or being locked in a room. Eventually, a man named Hiro finds her in their hotel room and begins to download her memories using a cable. She too has a memory implant. She willfully signed up for a project lead by Cromwell to download her memories in exchange of fame as an actress. Kern runs off to Thailand where he enters a muay thai camp with other fighters and trains. Thales tries to find his mother in her old house in the hills, but she is not there. He sees that an Asian woman is stalking him. When he calls the surgeon, he assures her that his mother is okay, but Thales does not trust him.

Irina hides out in Patmos in Constantin's old chateau. She hacks into Cromwell's computer system using Cloudbreaker and learns that he is trying to harvest memories in order to pay a mysterious figure who offers him a retrovirus that could prevent him from aging and extend his life. The next day, there is an attack on the chateau by Cromwell's militia. She runs to Japan where she tries to find another hidden node in the city, a server that she thinks is helping power the big AI. Meanwhile, Kern starts prize fighting in Kuan Lon, and is found by Hiro, who recruits him to work for him as a mercenary. He receives a from call from Akemi telling him to steal his old phone from Hiro, and to take it to a new location. Thales meets with another version of Akemi who tells him that she is like him, they both have memory implants, and she thinks the surgeon is up to no good. She gives him a gun, but when he goes to steal the tablet from the surgeon to find out the truth, he is under attack by drones. A woman, who is Irina's double, comes to his rescue by disabling the drones with a wave of her hand. He successfully steals the tablet form the surgeon and Akemi and Thales begin to understand the truth after Irina's double, called the magician, tells them the truth. They are both AI simulations based off of their memories. Thales died shortly after his collapse at the oculus, and he lives on through his memories in the simulation.

Thales is able to communicate with Irina when she connects to one of the nodes in Japan. He thinks that Irina can help defeat the mathematician, a big AI that controls makes AI composites of memories in a virtual world to study human behavior. The mathematician goes through a series of purges of older versions of the virtual world when the AI memory composites find out what is going on or rebel. To prevent another end of their world, Irina must defeat the mathematician. Simultaneously, Akemi tells Kern to break apart his phone and to use a blue shard of metal within it to connect to a server inside of a space tower, in order to create an opening for Irina to interface with the big AI. Through Kern's action, a gate is opened by which Irina can meet and destroy the mathematician. Once Irina defeats the mathematician, by way of copied versions of herself who expose the locations of various vulnerable nodes around the world, Irina has gained some control over the AI simulated world. Irina creates memories for Akemi that make her happy and set the stage for Kern to become an apprentice to a sword maker in Japan. She also joins forces with Thales in order to avert problems that may be cause by AI's meddling into world politics and other catastrophic events both in the virtual and real worlds.

More summaries and resources for teaching or studying Void Star.