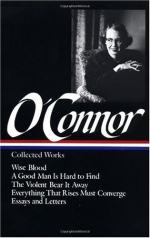 The Violent Bear It Away Summary & Study Guide

The Violent Bear It Away Summary & Study Guide Description

The Violent Bear It Away Summary & Study Guide includes comprehensive information and analysis to help you understand the book. This study guide contains the following sections:

This detailed literature summary also contains Topics for Discussion on The Violent Bear It Away by Flannery O'Connor.

“The Violent Bear It Away” is a Southern Gothic novel by Flannery O’Connor, taking place in Tennessee in 1952. When the novel opens, fourteen year-old Francis Marion Tarwater begins to bury his great-uncle, Marion, who has raised him in the backwoods. Marion, an extraordinarily religious man who believed himself to be a prophet of God, and brought up Tarwater with the same belief –that he, too, is to be a prophet. But while Tarwater struggles to bury his uncle, a strange voice begins to speak to him in his head, telling him it would be easier to walk away from the expectations of his uncle, and of others, rather than to carry them out. Tarwater, who has lived his life doing exactly as he is told, gets drunk instead, and burns his uncle’s house to the ground, believing his uncle’s body to still be inside. While Tarwater is drunk, a local black man and friend of Marion’s, Buford Munson, has buried the old man in Christian fashion.

Tarwater journeys to the city to escape his destiny, and to meet his estranged uncle, Rayber. Rayber had originally been tasked with rearing Tarwater, but Marion, living with Rayber at the time, kidnapped the infant to raise him in the backwoods. Tarwater had been born following a car accident which claimed the lives of his unwed mother and grandparents, leaving Rayber the obvious choice for raising Tarwater. Rayber, however, intended to raise Tarwater as an atheist, in a purely secular fashion, which did not sit well with Marion. When Rayber goes to retrieve the infant Tarwater, Marion shoots him in the leg and in the ear, leading to near-deafness for Rayber. Rayber himself had nearly been baptized by Marion as a boy, and utterly hates Marion for it. When Tarwater appears on Rayber’s doorstep, Rayber is thrilled that he will have a chance to give Tarwater a normal life, and pull one over on the old uncle.

From the start, Rayber struggles with Tarwater, trying to shake his religious upbringing from him, but has little success. He manages to convince Tarwater that the only true way to be born again is to start one’s life over in a different direction. Tarwater agrees with this notion, as he is trying to run away from his destiny, which includes a call from Marion before death to baptize Rayber’s young, simple-minded son, Bishop. Rayber, frustrated by the lack of progress he is making with Tarwater, decides to bring him back to his home in the backwoods, to confront him with the truth, there. While staying at a nearby lake in preparation for the final leg of the trip, the voice in Tarwater’s head, which has been telling him to drown, rather than baptize Bishop, overwhelms him –and he does so. But as he drowns Bishop, he says the words of baptism automatically. He then turns to head back home, where he catches a ride with a young man who gets him stoned and drunk, rapes him, and leaves him in the woods. Tarwater burns the spot in which he was raped, sets the woods on fire as he goes, and returns to the place of his upbringing. There, he learns that Buford has given his uncle a Christian burial, destroying the only thing Tarwater believed prevented him from becoming a prophet. As the novel ends, he heads to the city once more, to fulfill his destiny as a prophet.