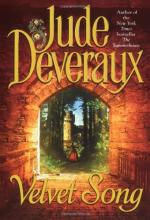 This detailed literature summary also contains Topics for Discussion and a Free Quiz on Velvet Song by Jude Deveraux.

Jude Deveraux's Velvet Song is a story of love, relationships, and pride. The story is set in England's beautiful countryside in 1502, where Deveraux allows the reader to meet Alyx Blackett. Deveraux's musically talented and headstrong heroine is the catalyst for the novel's plot. At twenty years old, Alyxandria Blackett lives in Moreton, England with her father.

One day, as Alyx is on her way to her music lessons, she is accosted by a nobleman named Pagnell. He attempts to rape Alyx, but she escapes from him, leaving his pride wounded and his heart vengeful. Pagnell discovers where Alyx lives and kills her father. He then accuses Alyx of being a witch and has a warrant for her arrest issued.

Terrified, Alyx flees Morton. Luckily, she is helped by her priest. He and a friend dress her in boy's clothes and send her to become Raine Montgomery's squire. Raine is a nobleman who has been banished into exile by King Henry for his part in the Montgomery/Chatworth feud. Raine has started a reform camp for convicts and outlaws. Upon meeting Raine, Alyx falls head over heels in love with him. She attempts to train to become his squire, but Raine quickly realizes she is a girl and falls in love with her. The two, along with their friend Joss (another talented musician) decide to keep Alyx's identity a secret.

Soon the rest of the camp begin to turn on Alyx. They believe that she is stealing from them. Raine decides he will take Alyx away, but Alyx becomes concerned Raine will be arrested by the king for returning to England. She and Joss lead Raine to believe they are having an affair. Angry and hurt, Raine banishes them from camp.

Four months pass, and Alyx discovers she is pregnant. She and Joss make a living as traveling musicians. They entertain many nobles at weddings and various parties. At one particular party, Alyx is discovered by Pagnell. Pagnell kidnaps Alyx. To Alyx's relief, she is rescued by Raine. Although Raine is furious at Alyx for lying to him, the two marry.

Because Raine's lands have been confiscated by the king, Raine brings Alyx to live with his brother, Gavin. While marriage suits Raine and Alyx, they often fight over Raine's sense of pride and honor. Alyx will do anything in her power to protect Raine's life. While Raine does love Alyx, his main goal is to restore his family's honor and remain loyal to the Montgomery clan. The two continually fight about Alyx's actions.

Against Raine's wishes, Alyx ventures to see King Henry. The king agrees to pardon Raine if Alyx will sing for him. Alyx agrees and gains back everything Raine wished for. Raine is furious. For over six months he refuses to contact Alyx. When Alyx believes that all hope is lost, Raine comes back to her, begging for forgiveness. Raine could not understand how a small woman could do what a man with wealth, power, and influence could not do. The two finally reconcile and begin their lives together again.