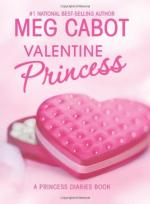 Meg Cabot
This Study Guide consists of approximately 22 pages of chapter summaries, quotes, character analysis, themes, and more - everything you need to sharpen your knowledge of Valentine Princess.

Valentine Princess by Meg Cabot is the story of how Princess Amelia, dealt with Valentine's Day on the first February 14th on which she had a serious boyfriend. Princess Amelia is also known as Mia Thermopolis. As the story unfolds, Mia is on her way in a private jet to her family's kingdom in Genovia. She is writing a screenplay based on true life events - her own. She is reminded of her first Valentine's Day with her boyfriend, Michael Moscovitz. The story flashes back to that time, some eighteen months before.

The date is February 11th and Valentine's Day will soon be occurring. Mia has no idea what she should do for Valentine's Day. Should she get Michael a card or a gift? Will he get her something? It doesn't help that he hasn't said a word about the day. Mia decides to try to do some not-so-subtle probing to see if she can find out where Michael stands on the day for lovers. In the limo on the way to school, Mia asks Lilly, who is Michael's sister, what plans she has with Boris, her boyfriend, for Valentine's Day. Mia finds that asking Lilly was a huge mistake. Lilly hates the day. It's commercialized and pressures people to buy cards and gifts.

Michael is not much better. He agrees with his sister that the date is over-hyped and over-commercialized. He also mentions that the day was originally a Roman celebration of Juno. Tradition called for boys and girls to draw names. The resultant pairs were linked to each other for the next year. The ceremony actually took place on February 15th and was known as Lupercalia Day.

Since Mia gets nowhere with Michael and Lilly, she asks her friend Tina for her opinion. Tina has just been dumped by her boyfriend and warns Mia to make the most of Valentine's Day with Michael so that he knows she really cares. Another friend has plans to go to a romantic restaurant to celebrate the day. Her mother, Helen, is pregnant by her live-in boyfriend who is also Mia's algebra teacher, Mr. Gianini. Helen's feet are swollen so they will order in but will celebrate the day together. Mia is upset - even her mother has a Valentine!

All the while Mia is struggling with what to do about Valentine's Day, she is dealing with her grandmother. She has to go to her grandmother's suite at the Plaza each night after school for princess lessons. One night an astrologer, Dr. Steve, is there and predicts that Mia will wind up with a Leo. That is bad news for Mia because Michael is a Capricorn. Dr. Steve predicts that Grandmère is at risk of bodily injury and will soon have a marriage proposal.

Mia asks Mr. Gianini how she could persuade Michael to be more amenable to celebrating Valentine's Day. He tells her the day is not important. How she and Michael feel about each other is what counts. Helen tells her daughter something similar. She tells her that she should give Michael a card if she wants to and should not worry about whether he gives her something or not. That is what true love is all about—unconditional.

Grandmère breaks her toe while trying to escape from Dr. Steve who professes his love for her and proposes to her. This frightens Mia because his predictions about Grandmère have come true. Would his prediction that she would wind up with a Leo boy also come true?!

In the end, Mia makes a homemade Valentine for Michael which he loves. He doesn't give her a card but he writes a song and appears on her balcony that evening and sings the song while he accompanies himself on the guitar. Since Michael hadn't made plans with Mia, she had accepted an invitation to attend a movie marathon at Tina's house. Mia and Michael plan to have their romantic dinner the next night on Lupercalia Day.

Flash forward to June 9, when Mia learns that every person has his or her own way of expressing love. Looking back, she would have never imagined that Michael would write her a song but she couldn't have been more pleased. One can't say too much for the nice surprises in life!