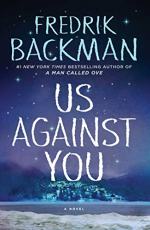 Us Against You Summary & Study Guide

Fredrik Backman
This Study Guide consists of approximately 80 pages of chapter summaries, quotes, character analysis, themes, and more - everything you need to sharpen your knowledge of Us Against You.

Us Against You Summary & Study Guide Description

Us Against You Summary & Study Guide includes comprehensive information and analysis to help you understand the book. This study guide contains the following sections:

This detailed literature summary also contains Quotes and a Free Quiz on Us Against You by Fredrik Backman.

The following version of this book was used to create the guide: Backman, Fredrick. Us Against You. Atria Books, 2017.

Told from the point of view of a third person collective narrator, Us Against You is the story of a Beartown and its inhabitants. The novel opens on the outskirts of Beartown. Nestled in the woods, Beartown is completely isolated with the exception of its neighboring town Hed. Despite their differences, the two towns share a common love for hockey.

The novel unfolds in a fragmented structure, each chapter presenting new interwoven pieces of distinct characters’ stories. Through this comingling of perspectives, Fredrik Backman demonstrates the ways in which each character is connected.

The spring prior to the start of the novel’s narrative arc, Kevin Erdahl rapes Maya Andersson. The incident triggers a succession of violence and threatens to disturb each of the relationships encapsulated within the Beartown region, and within the pages of the novel.

At the start of the novel, the regional council reallocates Beartown’s hockey money to Hed’s team. The loss of the Beartown A-team promises to impact everyone in town. After the news of the team’s coming dissolution spreads, the two towns react. Beartwon and Hed youth send harassing texts to Maya Andersson and Benji Ovich. Because Benji sided with Maya after the rape, he has become increadingly isolated.

People of Beartown and Hed also blame Peter Andersson for the loss of the team. Because Peter turned Kevin Erdahl in on the day of the team’s finals, everyone believes he was trying to destroy the Hed team and put the hockey club at risk.

Meanwhile, the Andersson family struggles to stay together. Peter’s preoccupation with hockey has threatened his marriage for many years. Kira feels pushed aside by her husband and his work, and works throughout the novel to balance her desire for a fulfilling career with her familial responsibilities. Maya feels her rape has caused all the trouble. She feels if she had never existed, she would not have gotten raped, and her parents and brother Leo would not be further distancing themselves from one another.

In the town at large, loss of the team in tandem with the potential loss of the Beartown factory threatens to dismantle the community’s economical and social stability. A small fringe politician, Richard Theo, seeks political dominance throughout the novel. Richard hires Elisabeth Zackell as new coach of the Beartown A-team. Through her he plans to control the team and Peter, its general manager. Another of Richard’s plans is to sell the factory to his contacts. The new owners will sponsor the hockey club if Peter agrees to remove the Pack’s standing area from the arena. By controlling the factory, the club, and the rogue Pack, Richard will effectively run the entire town. His manipulations and deceit play members of the town against one another and upset the narrative subplot over the course of the novel.

Benji Ovich gains increasing dimension as the narrative explores his past and evolving identity. After Benji’s father commits suicide, Benji’s mother and three sisters raise him. Benji works to reconcile his father’s death throughout the course of the novel. His relationship with his family changes when the author reveals Benji’s homosexuality. Plagued by community harassment, and lonely after the loss of his best friend Kevin ERdahl, Benji struggles to understand who he is in the context of his community and team.

Through Benji’s relationship to the other players, the author creates another story arc that follows the hockey team’s growth over the course of the novel. Each of its players, including the younger men Amat, Bobo, and Vidar, finds camaraderie within their team. Through their rivalries with the head team, the author shows the ways hockey links all disparate members of the region.

Once Richard saves the A-team, the Beartown and Hed teams play one another several times during the season. The tensions of the past remain under those of the sport. The opposing teams intimidate and harass one another, burning Hed flags, burning Beartown jerseys, and fighting one another in the woods. These acts of violence come climax when the Hed players light the Bearskin pub on fire. When the boys flee back to Hed, the Pack follows them. Kira and Maya as well as an old man are driving on the same road. Ana and Vidar are running home on the road too. The cars collide and the old man hits Vidar and kills him.

The tragedy of Vidar’s death moves Beartown and Hed towards reconciliation and forgiveness. The townspeople come together to support Vidar’s family. In the final chapters of the novel, the other characters work to put their personal concerns aside as well. The narrator uses loss as a gateway to change and healing.

More summaries and resources for teaching or studying Us Against You.

Us Against You from BookRags. (c)2022 BookRags, Inc. All rights reserved.