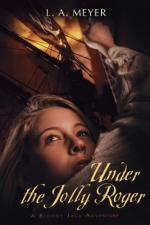 Under the Jolly Roger: Being an Account of the Further Nautical Adventures of Jacky Faber Summary & Study Guide

L.A. Meyer
This Study Guide consists of approximately 34 pages of chapter summaries, quotes, character analysis, themes, and more - everything you need to sharpen your knowledge of Under the Jolly Roger.

Under the Jolly Roger: Being an Account of the Further Nautical Adventures of Jacky Faber Summary & Study Guide Description

Under the Jolly Roger: Being an Account of the Further Nautical Adventures of Jacky Faber Summary & Study Guide includes comprehensive information and analysis to help you understand the book. This study guide contains the following sections:

This detailed literature summary also contains Topics for Discussion on Under the Jolly Roger: Being an Account of the Further Nautical Adventures of Jacky Faber by L.A. Meyer.

As the story opens, Jacky Faber is coming ashore after having been on the crew of the Pequod. She'd been aboard the Dolphin prior to that and had met a young man, Jaimy Fletcher. She is now in London and planning to meet up with Jaimy, but when she arrives at his house his mother is furious. She talks about Jacky's outrageous behavior and makes it clear she isn't welcome. A maid tells Jacky that Jaimy will be a racetrack the following day and Jacky plans to meet him there. She goes to her old neighborhood and finds a group of orphans living on the streets where she'd lived as a youngster. She learns where one of her friends is working and rescues the girl from a life of backbreaking labor.

The following day, Jacky dresses as a jockey and goes to the racetrack. There she sees Jaimy with a pretty young girl and jumps to the conclusion that he's in love with someone else. Outside the track, she's mistaken for a boy, captured, and pressed into service aboard the ship, the Wolverine, under the command of a sadistic captain named Abraham Scroggs. Jacky is signed onto the ship's crew despite the fact that she's a girl and she sets out to make the most of it, training the younger crew members and setting up drills to prepare for battle. Jacky's small crew is all that saves the ship at one point.

Scroggs attempts to rape Jacky but is in poor health and dies before he can complete the deed. Jacky hides the fact that the captain is dead for days, formulating a plan. She eventually reveals the death and proposes the ship stop looking the other way when smugglers run their blockade. The crew agrees to follow her and they take four ships as prizes. Jacky keeps one of the ships for herself but turns the others and all the cargo over to the government. She calls on an old friend to captain the Emerald and they operate under legitimate privateer license for a time. The license is eventually revoked and Jacky is taken prisoner.

By that time however, she's gained the trust and loyalty of the entire crew of the Emerald as well as the crew of the Wolverine. She's locked up and the captain who takes her prisoner plans to turn her over to the English government. But then the ship is called into battle and Jacky finds herself fighting with her former shipmates. As the battle is winding down, Jacky finds an opportunity to escape and would have been home free except that she realizes many of the crew will drown if she doesn't return to the sinking ship. She does return though it means she's again a prisoner. However, when the crew have been rescued and taken to safety aboard another ship, the captain who'd captured her, shoves her boat away and tells her he plans to report that she escaped during the battle.

More summaries and resources for teaching or studying Under the Jolly Roger: Being an Account of the Further Nautical Adventures of Jacky Faber.

Under the Jolly Roger: Being an Account of the Further Nautical Adventures of Jacky Faber from BookRags. (c)2022 BookRags, Inc. All rights reserved.