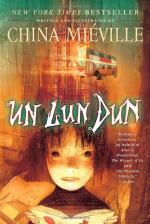 Un Lun Dun by China Mieville is a young adult fantasy novel. At the beginning of the novel, Deeba Resham’s friend Zanna starts to notice strange things around her, like a fox at the edge of the schoolyard looking straight at her. The fox bows before it scampers off. More than one person says that Zanna is “Schwazzy,” but neither Zanna nor Deeba can figure out what that means. When Zanna stays overnight with Deeba, the two of them watch as a broken umbrella crawls spider-like up the wall outside Zanna’s bedroom to peek in and spy on her.

The two friends chase the umbrella into a basement where they magically enter into a different London, where things are familiar and also profoundly unfamiliar. People are dressed in costumes from every period in London’s history, and there are houses made out of old typewriters, hats, and other trash. Everyone who sees Zanna and Deeba is reverential towards Zanna, whom they treat as the “Schwazzy,” the chosen one.

The task Zanna has been chosen to perform is to rid UnLondon of the Smog, a noxious, poisonous cloud that has developed consciousness and a will of its own. Zanna and Deeba are befriended by many people, each of whom is odd in their own unique way. Hemi is half ghost and half human. Skool is an undersea diving suit filled with water and fish. Rosa drives a bus that can also navigate as a balloon through the sky.

In her first encounter with the Smog, though, Zanna inhales the poisonous fumes, and she and Deeba are sent back to London where they should recuperate.

Deeba, however, realizes that something is wrong: Professor Unstible, a leading researcher in the fight against the Smog, is not in fact working in UnLondon. He has been killed in an explosion caused by the Smog. Deeba figures out how to return to UnLondon, where she brings the news that Professor Unstible is not who he seems to be. With her motley crew of friends and helpers, Deeba finds the weapon that will defeat the Smog and finally liberates UnLondon from its threat.