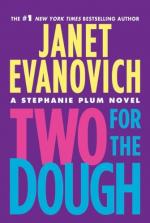 Two for the Dough Summary & Study Guide includes comprehensive information and analysis to help you understand the book. This study guide contains the following sections:

This detailed literature summary also contains Topics for Discussion and a Free Quiz on Two for the Dough by Janet Evanovich.

In the sequel to Evanovich's One for the Money, Stephanie Plum returns as an inexperienced bounty hunter. She has been assigned to track down Kenny Mancuso, wanted for shooting his friend, Moogey, in the knee. As a first time offender, Kenny is assumed an easy catch. It is soon clear, however, that this case will be anything but easy.

Caskets missing from Stiva's funeral home are connected with ammo that Kenny is suspected of stealing from the army. As Kenny gets more desperate to make his ammo deal, he begins taunting Spiro Stiva by cutting body parts off his corpses. Often, he leaves the body parts for Stephanie to find.

The plot escalates until Stephanie's Grandma Mazur is first stabbed, then kidnapped. In anger, Stephanie tracks down Kenny and Stiva, and a fight ensues. Grandma, shooting at Stiva, sets off a chain of explosions from the stolen ammo nearby. Cop and friend, Joe Morelli, helps Stephanie apprehend Kenny Mancuso, who is locked up for a long time.