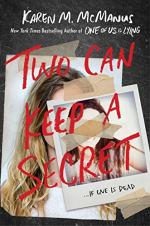 Karen M. McManus
This Study Guide consists of approximately 49 pages of chapter summaries, quotes, character analysis, themes, and more - everything you need to sharpen your knowledge of Two Can Keep a Secret.

Two Can Keep a Secret Summary & Study Guide includes comprehensive information and analysis to help you understand the book. This study guide contains the following sections:

This detailed literature summary also contains Quotes and a Free Quiz on Two Can Keep a Secret by Karen M. McManus.

The following version of this book was used to create this study guide: McManus, Karen. Two Can Keep a Secret. Delacorte Press, 2019. Kindle.

Two Can Keep a Secret is narrated in alternating chapters by Ellery and Malcolm, two high school seniors. Ellery and her twin brother Ezra arrive in Echo Ridge to live with their grandmother after their mother, Sadie, gets sent to court-appointed rehab. Neither Ellery or Ezra have ever been to their mother’s hometown, because she left shortly after her twin sister, Sadie, disappeared during senior prom, and she never came back, except to attend the funeral of her father, and her neighbor’s daughter, Lacey, who was murdered five years ago at the amusement park outside of town.

As they drive into town they find Mr. Bowman, the science teacher, lying in the middle of the road. He has been hit by a car and left to die. Ellery and Ezra settle into their new home and Ellery, who is obsessed with true crime stories, begins to investigate the town her mother grew up in after a vandal starts terrorizing the town and leaving threatening messages that seem to imply more murders are on the way. Ellery sees Malcolm, the younger brother of Declan, Lacey’s high school boyfriend and a prime suspect in the case, holding a can of spray paint near the graffiti, but she does not believe he is guilty.

Ellery and Ezra meet Brooke at the amusement park, and after helping her out of a sticky situation with a disgruntled customer, Brooke offers to get them jobs. Malcolm and his best friend Mia go to the cemetery to place flowers on Mr. Bowman’s grave, and they find a series of dolls strung up in a tree and another threatening message.

Ellery decides that she wants to solve the mysteries of Echo Ridge, and so she and Ezra go to the library and look up old yearbooks because Ellery is convinced that the past has everything to do with the present. At school, Homecoming Court is announced, and Ellery is nominated. The next day she finds a threatening message written on her locker.

Mia’s sister, Daisy, who used to be Lacey’s best friend, returns to town, along with Malcolm’s brother Declan. Both the younger siblings try to investigate why the pair has returned to Echo Ridge, but neither of them can understand the meaning of the return. Ellery and Malcolm start spending time together, and begin to like one another as more than just friends.

Malcolm goes to pick up Ellery and Ezra from work at the amusement park, and walks into a staff party. Before they go, they find Brooke, who is drunk and despondent. Malcolm offers to take her home as well, and the four leave together. Malcolm drops the twins off first, and the next day Brooke is reported missing.

When Officer McNulty questions Malcolm about taking Brooke home the night before, his stepsister, the beautiful and popular Katrin, tells the officer that Brooke thought Malcolm was cute, and that they might have been having a secret relationship. Malcolm denies the accusations, but he is aware that he looks every bit as suspicious as his brother once did. Ellery, Ezra, and Mia believe he is innocent, but the rest of the school looks upon him with doubt.

The four friends follow Daisy and discover that she is secretly dating Declan. When they confront her, she explains that she and Declan fell in love during high school, but never dated because she was best friends with Lacey. After Lacey died, Daisy felt so guilty that she moved out of town and never looked back. But the strain of ignoring her traumatic loss led to a mental breakdown, and she had to return to her parents’ house, where she reconnected with Declan, who moved back to town to be near her.

Ellery breaks into the recycling bin that Brooke was trying to get into during her last night at the amusement park. When she brings the papers over to Mia’s house to sort through them, she finds a receipt for a repair to Katrin’s car on the weekend that Mr. Bowman was killed in the hit and run.

Malcolm and Ellery go to Homecoming together to spy on Katrin, but they also find time to dance, talk, and flirt with one another. Katrin does not do anything suspicious, but the next night Malcolm catches her sneaking out and follows her. He videotapes her as she hangs up a threatening sign in the middle of the night. Ellery finds out that her mother had an affair with Officer Rodriguez’s father. She and Malcolm go over to his house to give him the tape of Katrin, but he does not seem to care about it and he says he will not be arresting her. He tells them to stay out of the investigation, but they ignore him.

Brooke’s body is found in the woods along with Declan’s class ring, which he last saw Lacey wearing. Malcolm tries to go to school, but Brooke’s ex-boyfriend beats him up and he is rescued by his brother, who drives him to his apartment. Malcolm questions his brother’s innocence, and then gets kicked out. He invites Ellery over to discuss the crime, and they realize that Brooke was out of town during the weekend that Mr. Bowman was hit by her car, and that Peter was the only one with access to her car. They realize he was having an affair with Brooke. Ellery is about to text Officer Rodriguez, but Peter comes into the room with a gun and leads them down to the basement where he locks them inside and turns on a generator to poison them. Before he leaves, he whispers to Ellery and tells her that he killed Sarah because he thought she was Sadie, who he once dated.

When Ellery wakes up, she is in the hospital and Peter is in jail. Officer Rodriguez saw part of her text and realized she was in trouble because he already had his sights set on Peter as the murderer. He arrived just in time to save her, and the police department arrested Peter before he could make it to Canada. In the end, Ellery and Malcolm go on a date to a clown museum, and Ellery muses to herself that she wants to keep the secret Peter whispered in her ear to herself for the rest of her life.

More summaries and resources for teaching or studying Two Can Keep a Secret.

Two Can Keep a Secret from BookRags. (c)2022 BookRags, Inc. All rights reserved.