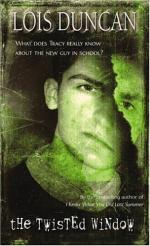 Winfield is the small, picturesque town where Tracy lives with Irene and Cory Stevenson. It is a backdrop, as the story could take place in any town that Tracy would dislike and that would be different from New York, where she lived with her mother.

New York is viewed through Tracy's memories. It is pertinent because her recollections of it are surprisingly positive, despite the fact that her mother was stabbed to death there. These memories coincide with one of the book's messages that perception is everything and one remembers what one chooses to remember.

Albuquerque is Brad's home and is shown to be beautiful through very descriptive passages. It is tainted with tragedy for Brad, but the characters never actually make it there.

Rock Springs is a small town where Tracy stops with Brad and Julianne to get breakfast. It is...