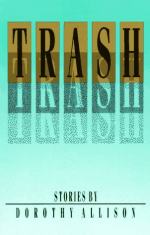 Related Topics
Bastard Out of Carolina
Cavedweller: A Novel

Dorothy Allison
This Study Guide consists of approximately 68 pages of chapter summaries, quotes, character analysis, themes, and more - everything you need to sharpen your knowledge of Trash.

The following version of this book was used to create this guide: Allison, Dorothy. Trash. New York: First Plume Printing, 2002.

In “River of Names,” the narrator thinks about all the family members she has lost as she tells a sanitized version of her family history to her lover, Jesse. Jesse has had a perfect life, and through the course of the story, the narrator realizes she will never be able to be with Jesse long-term because Jesse did not suffer the way the narrator did.

In “Meanest Woman Ever Left Tennessee,” this story focuses on Shirley Boatwright – a mean woman – and her daughter, Mattie. Despite their mother’s cruelty, Mattie maintains hope and resilience. Eventually, Mattie and her brother do leave their mother’s house.

In “Mama,” Alma, the narrator of this story, discusses her great love for her mother. Alma recounts her stepfather’s abuse; if Alma wanted to spend time caring for her mother, she had to meet her stepfather’s needs, too. In the story’s present, Mama has been diagnosed with cancer, and the prognosis is not good. Alma cannot believe such a strong woman will be struck down. In the end, Alma recognizes how alike she is to her mother, although she is not quite as powerful and takes better care of her own body. Even though they are alike, though, Alma recognizes that she cannot rescue her mother from her life or her disease.

In “Gospel Song,” the narrator is obsessed with gospel music, and despite her own bad voice, dreams of becoming a gospel singer herself. The narrator befriends an albino girl her age named Shannon Pearl, whose parents run a gospel music circuit. The narrator takes care of Shannon, but is also jealous of her since Shannon’s parents dote on her. Most people in the world are cruel to Shannon, however, and by the end of the story the narrator and Shannon have decided they will eventually enact revenge on those who have wronged them.

In “I'm Working on My Charm,” the narrator is at a cocktail party in the North where a woman treats her differently because the narrator is a Southerner. This experience in her adult life reminds the narrator of when she was a teen and worked in a diner with her mother. While the waitresses could predict how Southerners would tip, they never knew what Northerners – like the woman at the cocktail party – would do. The narrator knows she needs to play into Southern stereotypes to get ahead.

In “Steal Away,” the narrator starts stealing things in college. She steals from stores and from people who she knows. She forms a relationship with one of her college professors, and, after being slighted by this professor, steals – and eventually replaces – the professor’s books after marking them up with blue pen. When the narrator’s parents come for her graduation, she steals the commemorative roses from the graduation signs; this theft is the best moment she had throughout her entire college experience.

In “Monkeybites,” the narrator works in a biology lab at her college, caring for the monkeys, and her girlfriend Toni comes to visit her there. Toni takes their relationship more seriously than the narrator does. Toni loves the narrator and wants to move in together, but throughout the course of the story, the narrator recognizes that she does not reciprocate Toni’s feelings.

In “Her Thighs,” the narrator is attracted to her girlfriend Bobby, but Bobby is very sexually withholding. The narrator comes to recognize she does not want to be with someone who treats her as though she is “uncivilized.”

In “Muscles of the Mind,” the narrator moves in with an older lesbian named Anna who fought for gay rights long before the narrator came out. The story mostly focuses on the politics within the lesbian community: feminist groups that don’t like the rough women who shoot pool; older lesbian women who do not understand the political bent of younger women.

In “Violence Against Women Begins at Home,” the narrator and her friends Paula and Margaret meet for lunch to discuss the situation between their other friends. Their friend Jackie is an artist who creates sexually-charged drawings of women. Two of their other friends broke into Jackie apartment, trashed it, and scrawled “Violence against women begins at home” on her wall to protest her artwork.

In “A Lesbian Appetite,” the narrator has an insatiable hunger for food and sex; in her mind, too, these things are very connected. When she likes a woman, she wants to feed the woman the heavy food of her childhood. When a woman only eats healthfully or does not eat much at all, the narrator soon discovers she and her partner are not compatible.

In “Lupus,” the narrator goes to visit her cousin Temple back in their hometown where Temple lives. Temple has disengaged from the family and from the town, spending most of her time reminiscing about her husband who died from lupus. The narrator notices that Temple’s two daughters likely have the same disease that killed their father.

Finally, in “Compassion,” the narrator’s mother is dying of cancer. While her mother has had cancer on and off for decades, the narrator and her sisters, Arlene and Jo, know she will not survive this time. In the story, the sisters deal with the childhood abuse from their stepfather, Jack, the distance between them, and the fear their mother feels as she slips from life.

More summaries and resources for teaching or studying Trash: Stories.