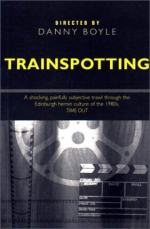 This detailed literature summary also contains Topics for Discussion and a Free Quiz on Trainspotting by Irvine Welsh.

Trainspotting by Irvine Welsh is an irreverent and uncompromising portrait of the heroin subculture in Edinburgh. The narrative cycles through a number of different users, pushers, scam-artists, and general hooligans, though it focuses on a core group of five addicts. The novel is essentially the vision of a group of young men who have chosen to drop out of polite society in search of brief, luminous chemical joy.

The novel focuses primarily on Mark Renton, a Leith heroin addict who intermittently tries to kick the junk. He and his fellow addict, Spud, defraud the government of unemployment benefits to fund their habit. They have a mate called Simon "Sick Boy" Williamson, a charming sometime pimp. His illegitimate daughter dies a crib death early in the novel. They also have several non-addict friends: Tommy, a sex-obsessed innocent; Davie, a service-worker; and Begbie, an alcoholic sociopath.

Tommy's girlfriend breaks up with him, and he soon is doing heroin as a way to cope. Meanwhile, Begbie is annoyed that his girl has gotten pregnant, but he rarely has to see her as he is often out of town running drugs in London. Renton, temporarily off junk, accidentally sleeps with a 14-year-old girl, thinking she is an adult. Soon, he and Spud relapse and are caught stealing books to fund their habit. Spud goes to jail, and Renton attempts methadone treatment. He relapses again and overdoses, and his parents force him to quit cold-turkey.

Not long after Renton gets clean, his brother Billy is killed by an IRA bomb in Ulster. Sick of Scotland, he travels down to London, but on a visit home he becomes involved with an acquaintance called Kelly. While Renton is in London, Davie contracts HIV and hatches an elaborate plan to take revenge on the man responsible, eventually killing him. Not long after this, another addict and friend of Renton's named Matty dies, reuniting the junkie coterie of the novel. By this time, Renton and Kelly have parted ways, and he soon decides to move back to Leith.

Back home and relatively clean, Renton is forced to deal with his past, dropping in on his old dealer, now an amputee, and Tommy, who has contracted HIV and seems likely to die. The novel ends with Begbie arranging a heroin deal in London, earning 16,000 pounds for Renton, Spud, Sick Boy, and himself. Renton steals the cash and flees to Amsterdam, ready to start a new life.

The novel is, in the end, a series of loosely connected short stories with a recurring cast of characters. More than telling a single story, it illuminates a whole subculture, giving the reader a sense of the way these groups interact and the stories that survive from their short, manic lives.