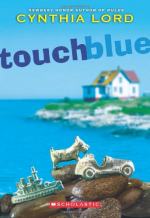 Related Topics
Rules
Half a Chance: A Novel
A Handful of Stars

Cynthia Lord
This Study Guide consists of approximately 40 pages of chapter summaries, quotes, character analysis, themes, and more - everything you need to sharpen your knowledge of Touch Blue.

This study guide refers to the following version of this book: Lord, Cynthia. Touch Blue. Scholastic, 2010.

Touch Blue is a young adult novel by Cynthia Lord in which 11-year-old Tess and her family take in 13-year-old Aaron, a foster child, not only to give him a better life but to help save their island’s school. When the novel begins, the Hamilton family has left Maine’s Bethsaida Island, bringing their five children with them. The State of Maine announces that the island’s small school now has too few children to remain open, and will be closed unless a solution can be reached. Reverend Beal brings the families of the island together in the decision to take on five foster children to help those children and to save the school.

Tess believes in lucky items early in the novel, and the morning the foster children are set to arrive, she discovers a blue piece of sea glass on the beach which she keeps for good luck. Tess, her little sister, Mom, and Dad take in Aaron, a redheaded boy whose mother is a drunk and a drug addict, whose grandmother has died, and who has been kicked around between various homes overt the past few years. Tess hopes to make Aaron feel welcome, not only because she feels badly for him, but because she fears going to school over on the mainland. No matter what Tess does, however, she cannot bring Aaron out of his shell. Mom and Dad remind Tess and Libby that it will take time, that Aaron himself has had a lot of struggles. Tess deeply loves her parents, especially her Dad, and so resolves to being stubborn about getting Aaron to feel welcome.

As time passes, Aaron opens up in bits and pieces. It is enough for Tess to learn that Aaron is an amazing jazz musician who can play the trumpet with great skill. Aaron also takes an interest in the skiff that Tess is working on restoring, and seems to click with Dad. Mom believes this is because Aaron has never had a father figure in his life, and because Dad is strong and reassuring. Tess is thrilled about this, especially because the time she, Dad, and Aaron spend together is spent aboard Dad’s lobstering boat. It is through working on the water that Aaron continues to open up. Tess lets it be known to Mrs. Varney, who in turn lets it be known to Mrs. Coombs, that Aaron is an excellent musician. Aaron is volunteered to perform at the Fourth of July picnic, which he does to great acclaim. However, Aaron is constantly harassed by Eben, a local bully, who spares no expense to call Aaron an orphan without a home.

Having had enough, Aaron is set to run away, but Tess follows him. Aaron admits he wants his own mom and his own home. Tess manages to convince Aaron to stay if Aaron will play in the island’s summer talent show, and if Tess will invite Aaron’s mom to the performance without Aaron’s caseworker’s knowledge. Aaron agrees to stay, and Tess writes the letter. Libby finds out about this, however, but promises to keep it a secret. When the show arrives, Aaron is thrilled while Tess is relieved to see that Aaron’s mom has secretly come. However, when Eben accuses Aaron of being an orphan, Libby leaps to Aaron’s defense, accidentally pointing out Aaron’s mom in the process. Tess is reprimanded for what has happened, as her actions could lead to Aaron being removed by his caseworker. However, this is decided against. Aaron asks to be able to speak to his mom on the phone once in a while, and decides to stay on with Tess, Libby, Mom, and Dad. At the end of the novel, as they release a rare blue lobster back into the water, Tess says that the lobster will find a home where they have released him if he chooses to do so. By this, Tess means Aaron as well. Dad is very proud of Tess, and very grateful to have Aaron as a part of the family.

More summaries and resources for teaching or studying Touch Blue.