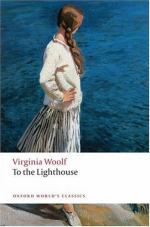 Related Topics
Three Guineas
Jacob's Room: Novel
The Voyage Out: A Novel
The Years
Night and Day: A Novel

Introduction & Overview of To the Lighthouse

Virginia Woolf
This Study Guide consists of approximately 66 pages of chapter summaries, quotes, character analysis, themes, and more - everything you need to sharpen your knowledge of To the Lighthouse.

To the Lighthouse Summary & Study Guide includes comprehensive information and analysis to help you understand the book. This study guide contains the following sections:

This detailed literature summary also contains Bibliography and a Free Quiz on To the Lighthouse by Virginia Woolf.

The 1927 publication of Virginia Woolf's To the Lighthouse was a landmark for both the author and the development of the novel in England. Usually regarded as her finest achievement, it won her the Prix Femina the following year, and gained her a reputation as one of Britain's most important living authors. Not only was it a critical success, it was popular too, selling in large quantities to a readership that encompassed a broad spectrum of social classes. Since Woolf's death in 1941, To the Lighthouse has risen in importance as a focus of criticism concerning issues of gender, empire, and class. Along with James Joyce's Ulysses, it continues to be heralded as a milestone in literary technique.

The complexity of Woolf s writing in To the Lighthouse has become almost proverbially intimidating, as suggested famously in the title of Edward Albee's 1962 play, Who's Afraid of Virginia Woolf? Written from multiple perspectives and shifting between times and characters with poetic grace, the novel is not concerned with plot. Instead, it paints a verbal picture of the members of the Ramsay family and their friends. In the first section, the character of Mrs. Ramsay is the lens through which most of the perspectives are focused, and her son's desire to go "to the Lighthouse" is the organizing impetus from which the picture takes shape. In the central section, the Lighthouse stands empty as the narrative marks the passage of time and the death of many of the characters. In the third and final section, with Mrs. Ramsay dead, the remaining family and friends finally get to the Lighthouse, and the novel becomes a meditation on love, loss, and creativity.

More summaries and resources for teaching or studying To the Lighthouse.

To the Lighthouse from Gale. ©2005-2006 Thomson Gale, a part of the Thomson Corporation. All rights reserved.