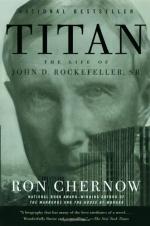 This detailed literature summary also contains Topics for Discussion and a Free Quiz on Titan: The Life of John D. Rockefeller, Sr by Ron Chernow.

Titan by Ron Chernow is the life story of John D. Rockefeller, Sr. The man who became the first American billionaire, and built the Standard Oil trust. The well researched book is fascinating reading and very informative showing how the trust came into being and how fortunes were made during the era of the robber barons.

The wealthy scion came from humble beginnings in upstate New York. The father he rarely talked about, William Avery Rockefeller, was a flim-flam man traveling around the country peddling medicines and other wares. His mother, Eliza, was religious and quite smitten with Big Bill. He left them for months at a time, leaving Eliza to take care of the family and take care of the farm. The family eventually moved to the Cleveland area. When John was in his last year of high school, Big Bill gave John money and told him to build a house for Eliza and the family, and then departed. John later received a letter from him saying he had married another woman. John did not want to be dependent on his father in any way and spent most of his life trying to hide the fact that his father was a bigamist. Quitting high school, he completed a course at a commercial college and soon had a job as an assistant bookkeeper. Two years later he was promoted to chief bookkeeper and within a year left to open his own commodity commission house with partners Clark and Gardner. One day a man walked in with a product he developed called kerosene. Rockefeller became a partner and this was the beginning of his oil business.

The business grew quickly as the economy began a boom period after the Civil War. The industry, like many others, was plagued with overproduction and falling prices. Rockefeller dealt with this problem as he was always to deal with it. He bought out his competitors, even his original partners. As he became wealthy, he formed the Standard Oil Company in Cleveland, which began to buy out its competitors where ever it could. To circumvent the Ohio laws of incorporation, a holding company was formed to hold the out of state properties. This eventually developed into the trust that was dissolved in 1911, making John D. Rockefeller the richest man in the world.

John D. Rockefeller and his wife Cettie were strict Baptists and maintained a strict household where every bill was checked and the children performed chores for their money. Their lifestyle did no reveal the amount of wealth their father had amassed. John D. believed that he brought his religious principles to the business world but he was viewed by many as ruthless and unscrupulous and his company was referred to as an octopus.

Rockefeller believed that God gave people wealth so they could use that wealth for the betterment of mankind. As a child, he was raised to make donations to the church and he went on to become the world's biggest philanthropist. His son was instilled with the same beliefs and spent his life managing the philanthropy.

This book provides a fascinating look at John D. Rockefeller and this exciting period in our history. The reader will appreciate the depth of Chernow's research and his writing style. The biography reads more like a novel and the reader will find it hard to put the book down. The book is well worth reading.