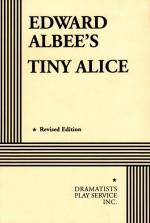 Miss Alice is a young, beautiful, wealthy woman. She manifests several contradictions, for instance, vacillating between being flirtatious and being businesslike, or despising Lawyer but being his lover. She intends to donate billions to different charitable institutions such as Jewish organizations, hospitals, universities, and the Catholic Church. It is this gift that brings her in contact with Cardinal, and thus, Julian, his secretary. Though she seems to sincerely like Julian, she, along with the other members of her household, are plotting against him. She seduces and marries Julian in order to sacrifice him to Tiny Alice. Despite the affection she shows for him, she matter of factly leaves him when the time comes.

Butler is Miss Alice's butler and her former lover. He claims to derive his name from his job, which gives him the function of serving the others. Butler demonstrates some empathy and liking...