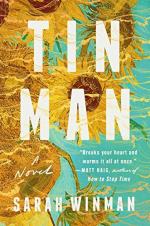 Sarah Winman
This Study Guide consists of approximately 38 pages of chapter summaries, quotes, character analysis, themes, and more - everything you need to sharpen your knowledge of Tin Man.

The following edition of this book was used to write this study guide: Winman, Sarah. Tin Man. Putnam, 2017. Hardcover.

In 1950, in Oxford, England, the pregnant Dora Judd wins a raffle contest at a community event. Against the wishes of her gruff husband, Len, Dora selects a painting of sunflowers as her prize.

In 1996, Dora’s son, Ellis Judd, is a depressed middle-aged man who works overnight shifts at a local car body repair shop. Ellis has been depressed for five years, ever since the passing of his beloved wife, Annie, in a car accident. When Ellis goes on a bike ride during his mid-shift break, he is hit by a car, and breaks his arm.

On the same street where Ellis was hit, he grew up with a friend, Michael Wright, an orphan who lived with his grandmother, Mabel, who owned a shop on that street. Ellis recalls how, after Dora had passed away when he was 14 years old, he and Michael had walked away from the funeral reception, and kissed in an area of Oxford known as the Long Bridges. Len had put a stop to Ellis’ dreams to be an artist immediately after Dora’s death, forcing him to work in the repair shop. Ellis had lived with Michael and Mabel for three months after Dora’s funeral. When he moved back in with Len, a kindly woman named Carol had already moved in with him.

Ellis is invigorated by his sudden off time, due to the broken arm, and begins to tend to his wife’s old garden, and also becomes friendly with his younger neighbor, Jamie. On Len’s birthday, Ellis goes over to celebrate with Carol and Len, and marvels at how much friendlier Len has become during his years living with Carol. Ellis tells them that he is quitting the plant permanently. At Ellis’ request, Len tells him that Dora’s old sunflower painting is still int the attic. While in the attic, Ellis also discovers a box labelled “Michael.” Michael had passed away alongside Annie in the car accident. After his death, Ellis had learned that Michael had the AIDS virus throughout his body. At Michael’s request, Ellis had scattered his ashes at Long Bridges. In the present moment, Ellis goes home and, looking through the minimal box, finds a journal that Michael had kept.

The first entry in Michael’s journal is labelled November, 1989. Michael is living in London, and tending to his lover, identified only as “G,” who is dying due to AIDS in a hospital. G is much younger than Michael, and was a painter. At the hospital, Michael begins to give practically fatherly advice to an even younger patient, Chris, who is next-door to G. Michael describes a trip he had taken as a 19-year-old, with Ellis, to France together. During the trip they were incredibly physically romantic: on the last day, Ellis proposed that they skip their train back to England, and stay there together. However, at the last minute, Ellis packs the bags, and they head back to England together, with Michael knowing that the physical part of their relationship is effectively over. G passes away on December 1st, sending Michael into a spiral of grief.

The next entry in the journal is from June 1990. Michael is walking across a rural area of France by himself, primarily to grieve. He recalls many fond memories, in the late seventies, shared by himself, Ellis, and Annie together. Michael ends up staying at a hostel-type farmhouse, swimming in the pool by himself each night. On one night, Michael is finally able to cry extensively. When it is time for Michael to catch a bus to the next region of France, he goes to the bus stop and turns around, asking the owner of the farmhouse to give him a job as a maid. Michael spends the rest of the summer there, quietly and diligently working.

After finally returning to London, Michael ties up a number of loose ends there, including finally talking with G’s parents. Michael moves back to Oxford, where he intends to reunite with Ellis and Annie after a few years of silence. One afternoon, Michael goes to Annie’s bookshop, where they happily reunite. Later in the evening, Michael and Annie arrive back at the home, where Ellis is working in the garage. Ellis and Michael joyously hug in the middle of the street.

The narration cuts away from the journal and back to Ellis in 1996: he has returned to the exact same rural farmhouse where Michael had lived, even arranging for the owner to allow him into Michael’s old room. The novel concludes with a description of a picture a neighbor took of Ellis, Michael, and Annie happily having a picnic in their front yard, on the day of Michael and Annie’s accident.

More summaries and resources for teaching or studying Tin Man.