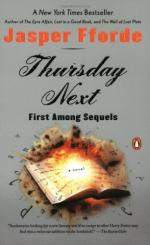 Thursday Next in First Among Sequels: A Novel Summary & Study Guide

Jasper Fforde
This Study Guide consists of approximately 28 pages of chapter summaries, quotes, character analysis, themes, and more - everything you need to sharpen your knowledge of Thursday Next in First Among Sequels.

Thursday Next in First Among Sequels: A Novel Summary & Study Guide Description

Thursday Next in First Among Sequels: A Novel Summary & Study Guide includes comprehensive information and analysis to help you understand the book. This study guide contains the following sections:

This detailed literature summary also contains Topics for Discussion on Thursday Next in First Among Sequels: A Novel by Jasper Fforde.

The "Thursday Next" series follows the life of Thursday, an ex-special operations agent who deals in the fictional, the surreal and the weird. She is an agent for Jurisfiction, the police of the BookWorld. At the beginning of "Thursday Next: First Among Sequels," Thursday is leading a double life. She has a middle class domestic life in the town of Swindon, with her husband Landen and her two children, and she owns a carpeting business. Landen is a stay at home dad, working on a novel, but makes his money ghost writing odd self-help books. Britain, where Thursday lives, is in trouble because the government has a stupidity surplus. The politicians are arguing about how to use up all the extra stupidity.

An old nemesis, Felix8 shows up at Thursday's house and is captured by one of her special operative agents. Thursday's son is avoiding joining the ChronoGuard, a regulatory agency that controls the sequence of time. And people are continually trying to steal her pet Dodo, Pickwick. Thursday has been lying to Landen about her work for fourteen years, because she made a promise to him that she would quit her dangerous job and settle down.

Thursday tells Landen she is going to work, but she really is going into the BookWorld. Thursday's uncle Mycroft, who died years ago, was a genius inventor who made it possible to enter the BookWorld. Thursday is surprised to see his ghost appear and asks one of her operatives to find out why Mycroft would come back after all this time.

In the BookWorld there are tensions over borders between genres and Thursday tries to keep Racy Novel from going to war. A mysterious probe is found in Pinocchio with the inscription of the evil company Goliath Corporation and Thursday's fictional self, Thursday5 from the book "The Great Samuel Pepys Fiasco," is training to be a Jurisfiction agent with Thursday5. Thursday is a meek version of Thursday, who is generally incapable of acting violently or thinking fast in the dangerous world of fiction. Thursday hesitates to fire her only because she knows that Thursday's heart is in their right place, and because she feels responsible for the way that Thursday5 was written.

Thursday's son Friday is supposed to become a ChronoGuard because the end of time is coming and according to history, Friday is the only one that can save it. But Friday doesn't want to be involved in the time industry.

In order to get rid of the stupidity surplus, the government is going to destroy classic books by letting a poll of readers re-write the plots. The only way Thursday knows to get back into the BookWorld is by helping the evil corporation Goliath perfects their book travel technology. They transport Thursday to a distant oral story and abandon her there. But, Thursday escapes and goes after Goliath. They are searching for a mathematical equation that will enable the ChronoGuard to truly control the past and future. With the help of a cab driver, Thursday5 and Bradshaw, Thursday is able to destroy to equation and escape again. Meanwhile, Thursday1-4 has been impersonating Thursday in the BookWorld, wreaking havoc on the Council of Genres. Thursday defeats Thursday1-4 by erasing her in one of the books. The book ends with a teaser for the next book, as Thursday tries to uncover a serial murder in the BookWorld.

More summaries and resources for teaching or studying Thursday Next in First Among Sequels: A Novel.

Thursday Next in First Among Sequels: A Novel from BookRags. (c)2022 BookRags, Inc. All rights reserved.