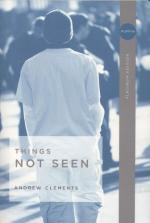 Andrew Clements
This Study Guide consists of approximately 28 pages of chapter summaries, quotes, character analysis, themes, and more - everything you need to sharpen your knowledge of Things Not Seen.

This detailed literature summary also contains Topics for Discussion on Things Not Seen by Andrew Clements.

Things Not Seen is a novel written by bestselling author Andrew Clements. Things Not Seen is about a 15-year-old boy, Bobby Phillips. One night, Bobby goes to bed snuggling under his electric blanket in his Chicago home. He wakes up the next morning as an invisible person. Bobby tells his parents that he is invisible right away. His mom, a literature professor and his dad, a physicist, both try to figure out how this could have happened to their son, but have no clue where to start searching for the solution to what seems like an impossible problem.

Until they can figure out how it happened and what they can do to reverse it, they instruct Bobby to stay home and not tell anyone about what is going on. Bobby uses his invisible state as an opportunity to explore the world from a different point of view. One day, while exploring one of his favorite places, the library, he literally runs into a girl. The girl turns out to be blind and so she does not realize that Bobby is invisible and simply a bundle of winter clothes, which is the disguise he uses to get around town in the Chicago winter weather. Eventually, Bobby and the girl, Alicia, form a bond and Bobby tells her that he is invisible.

Not only do Alicia and Bobby come together as close friends, but so do their parents. Alicia's father happens to be an astronomer. When he becomes aware of Bobby's situation, he helps Bobby's father figure out what could have caused Bobby to become invisible in the first place. Once he figures out what causes it, he is hopeful they can determine a way to reverse the invisibility.

In the end, it is a heartwarming story that helps teenagers that feel invisible realize that they are not really invisible. There is someone in everyone's life that cares, loves, and misses them when they are gone. Things Not Seen is a coming of age story that changes the life of not only the main character, Bobby Phillips, but everyone that comes into contact with him. It teaches everyone that you should appreciate what you have, but also be flexible enough to adjust to situations as circumstances change.

In addition, the novel reinforces that you should not judge people by what you see on the outside. Just because someone has a disability, such as being blind, it does not mean that they are not regular people on the inside. The novel helps to drive home the point that it is important to get to know people for who they are, not by how they dress or who they hang around with at school. The novel also leaves the reader wondering whether some conditions are pure science, psychological or there is some other force out in the universe that causes phenomenons to occur.

More summaries and resources for teaching or studying Things Not Seen.