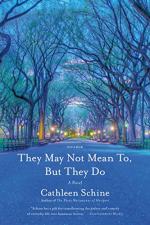 Plot Summary
+Chapters Summary and Analysis
Chapters 1 - 8
Chapters 9 - 17
Chapters 18 - 29
Chapters 30 - 38
Chapters 39 - 50
Chapters 51 - 59
Free Quiz
Characters
Symbols and Symbolism
Settings
Themes and Motifs
Styles
Quotes
Order our They May Not Mean To, But They Do Study Guide

They May Not Mean To, But They Do Summary & Study Guide

Schine, Cathleen
This Study Guide consists of approximately 54 pages of chapter summaries, quotes, character analysis, themes, and more - everything you need to sharpen your knowledge of They May Not Mean To, But They Do.

They May Not Mean To, But They Do Summary & Study Guide Description

They May Not Mean To, But They Do Summary & Study Guide includes comprehensive information and analysis to help you understand the book. This study guide contains the following sections:

This detailed literature summary also contains Quotes and a Free Quiz on They May Not Mean To, But They Do by Schine, Cathleen.

The following version of the novel was used to create this study guide: Schine, Cathleen. They May Not Mean To, But They Do. New York: Sarah Crichton Books, 2016.

The novel They May Not Mean To, But They Do by Cathleen Schine illustrates that family can be one of the best things, and one of the most difficult things, in life. Moves out of state, death, and aging are all things that can tear at the fibers that make up a family. As Joy’s story demonstrates, it is love, and acceptance, that keeps a family together.

Joy’s heart was broken when her daughter, Molly, moved to California. Joy believed the Bergman family, who had always lived in New York, should stay in New York. Additionally, Molly was the daughter. It was her unspoken responsibility to stay close to home and take care of her aging parents. Daniel, Joy’s son, lived in New York and visited his parents regularly, but he was not a daughter.

Even though Joy did not really think of herself as elderly, she had to admit that her husband, Aaron, was looking his age. He suffered with bladder cancer and dementia. He frustrated Joy by asking her the same question over and over again. Things really became bad when Joy had to get up multiple times in the night because Aaron was forgetting what his colostomy bag was for and pulling it out. Through all of this stress, Joy worked part-time because the family needed the money to pay the bills.

On Thanksgiving, Aaron frightened the family when he began crying in pain during dinner. He was admitted to the hospital where his children realized what bad shape he was in. They tried to get Joy to understand that she would have to hire in aides to help with Aaron but Joy said there was no money to do so. During Aaron’s stay in the hospital, Joy suffered a minor stroke and was diagnosed with suffering with C. diff, an antibiotic-resistant infection. When she returned home, Joy was too weak to take care of even herself so her children arranged for three people to stay with Joy and Aaron around the clock.

In the weeks that followed, Aaron grew weaker and died. After the initial grief, Joy began to search for a place that she belonged. She felt most at home in the apartment but was lonely because Aaron was not there. Molly invited Joy to stay with her in Los Angeles but Joy was not able to stay even the two months she was supposed to stay. Back in New York, Joy reunited with Karl, an old boyfriend whom Aaron had befriended in the park before he died. Joy’s children were afraid that Karl intended to take advantage of Joy and decided they needed to protect her from Karl.

Joy looked forward to her family’s trip to the small house she owned for summer vacation. She believed she would feel she belonged there but felt more out of place than ever. She had a terrible argument with her children when she asked if Karl could come to her granddaughter, Ruby’s bat mitzvah. Joy left the house and went back to her apartment early. Her children later relented and agreed Karl could come to the service.

The novel concludes with Joy attending court in her grandson Ben’s place. Joy at first felt out of place in the courtroom with people she thought were underdressed and showed no respect for the judge. As the day drug on, Joy began to feel weak and was impressed by the kindness of the men sitting next to her who fanned her and gave her a mint, helping her feel better. Joy realized that she was among a group of people who were just like her, who had faults but tried to be kind. She suddenly realized she belonged because she was a member of civilization.

More summaries and resources for teaching or studying They May Not Mean To, But They Do.

They May Not Mean To, But They Do from BookRags. (c)2022 BookRags, Inc. All rights reserved.