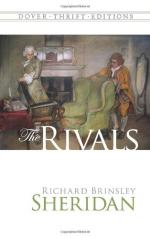 Introduction & Overview of The Rivals

The Rivals Summary & Study Guide includes comprehensive information and analysis to help you understand the book. This study guide contains the following sections:

This detailed literature summary also contains Bibliography and a Free Quiz on The Rivals by Richard Brinsley Sheridan.

The Rivals, a comedy in five acts, established Richard Brinsley Sheridan's reputation in the London theatre in 1775. When the first performance was not well received, Sheridan cut it by an hour, strengthened the idiosyncratic characters, and produced the new version in a highly successful second performance that proved his merit as a great comic playwright. The Rivals is one of a small handful of eighteenth-century plays that continues to be produced to this day. While the plot is complex, the characters are stock comic caricatures of human folly, aptly named.

A Comedy of Manners, the play satirizes sentimentalism and sophisticated pretensions, without the typical eighteenth-century moralizing. The dialogue crackles with wit even today, over two hundred years after it was first penned. This play is the source of the term "malapropism," named for Mrs. Malaprop, whose delightful "derangement of epitaphs" consists of using sophisticated-sounding words incorrectly. The Rivals is an example of what Oliver Goldsmith called in his 1773 "An Essay on the Theatre," "laughing comedy," in contrast with the "weeping sentimental comedy" that dished out heavy handed moralizing in every act. Sheridan wrote his most theatrical works, including the more well-known The School for Scandal during the five-year period at the beginning of his career. He went on to manage the Drury Lane Theatre for nearly thirty years and to pursue a successful career in politics, becoming famous for his oratorical abilities.