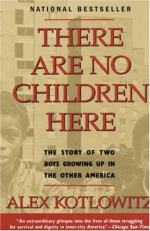 There Are No Children Here Summary & Study Guide

Alex Kotlowitz
This Study Guide consists of approximately 69 pages of chapter summaries, quotes, character analysis, themes, and more - everything you need to sharpen your knowledge of There Are No Children Here.

There Are No Children Here Summary & Study Guide Description

There Are No Children Here Summary & Study Guide includes comprehensive information and analysis to help you understand the book. This study guide contains the following sections:

This detailed literature summary also contains Topics for Discussion and a Free Quiz on There Are No Children Here by Alex Kotlowitz.

There Are No Children Here by Alex Kotlowitz chronicles the true story of two brothers coming of age in the Henry Horner public housing project in Chicago over a two year period. Lafeyette and Pharoah Rivers, their mother and siblings struggle to survive gun battles, gang influences, overzealous police officers, and overburdened and mismanaged bureaucracies to simply survive.

Lafeyette and Pharoah Rivers are eleven and nine years old when the story begins in the summer of 1987. They live with their mother LaJoe and six siblings, though the three oldest come and go. Their father Paul is rarely around due to his drug habit. Summer is the most dangerous season as shootings are constant. The family's safe place to avoid stray bullets is in the narrow hallway of their apartment. Lafeyette is wary of gangs and does his best to avoid them. The Conservative Vice Lords is the local gang headed by Jimmy Lee, who is later charged with gun and drug possession and sentenced to thirty years in prison. Lafeyette is friends with a fifteen year-old nicknamed Bird Leg who is obsessed with dogs. In August, the Vice Lords and their rivals reach a truce. Regardless, Bird Leg is shot to death in an altercation with rival gang members. At Bird Leg's funeral, Lafeyette is numb and wonders if he will make it to adulthood. The stress of a violent summer also affects Pharoah. He develops a severe stutter he can barely control and is easily startled by loud noises.

Pharoah begins fourth grade with a teacher who recognizes his skills in writing and spelling. Pharoah is so comfortable in the classroom that he stutters less and communicates more openly. He befriends an older boy named Rickey. Rickey is a bully and troublemaker but treats Pharoah like a younger brother and feels the need to protect him. Lafeyette is against this friendship at first but in time also becomes Rickey's friend. By winter, the Rivers' home overflows as the older children and their partners and babies move in. As many as thirteen people occupy the apartment. LaJoe becomes increasingly short-tempered. To add to the stress, her third child, Terrence, is arrested for armed robbery and the Department of Public Aid cuts off her benefits as they claim she has been "double dipping" into the system, which is not the case. LaJoe leans on family and friends for help and joins an all-night women's card game to make some cash. Many difficult months later, her benefits are reinstated.

Pharoah is selected to be part of the school spelling bee contest. He works diligently to prepare but is concerned about his stutter. During the competition the stutter takes over after the first few rounds and Pharoah is eliminated. He is distraught but plans to try harder next year. The following year after months of practice he is far more confident and wins second place. He is also chosen to participate in a summer school program at the University of Illinois. He is focused on the future but worries as his cousin Dawn graduated high school but is still in the projects. He wonders if having an education is enough to get out.

Lafayette begins to have some run-ins with the law. He and Rickey are caught shoplifting but the manager decides not to press charges. To make some spending money, Lafeyette and Pharoah go to the Chicago Stadium during a game to offer to protect parked cars for a few dollars. Lafeyette helps a parking lot attendant wave in cars. A policeman confronts him and pushes him to the ground, telling him white people do not have money to give to "niggers". For weeks Lafeyette and Pharoah avoid the stadium. Lafeyette becomes increasingly wary of authority figures. One of Lafeyette's favorite friends is Craig Davis. He is a rare young man as he graduates high school, is not in a gang, has a job, and aspires to become a radio deejay. He is deejay for many local community parties. One evening on the way to pick up stereo equipment, Craig is shot by a white police officer who suspects him of being a gang member and gun runner. Lafeyette is devastated by his death and it has a profound impact on him. He becomes depressed, numb, and bitter. He feels powerless about his life, believing he will be killed or end up in prison no matter what he does. Meanwhile, Terrence is offered a plea bargain of eight years in prison. LaJoe convinces him to take the offer because if the case goes to court he could end up with a much longer sentence. She is so tense about the situation she finally snaps and screams at a drug addict who has been coming on to her in recent weeks. After he threatens her, LaJoe's oldest son beats him up. For a moment, LaJoe contemplates running away with the five younger children, but she has nowhere to go.

After years of corruption and mismanagement, the CHA gets a new leader named Vincent Lane. He knows he will have to deal with the CHA's terrible reputation and mismanagement issues but the reality is worse than he imagined. His first act is to conduct building sweeps to try to get rid of the gangs. Housing managers soon become targets of violence. Despite various efforts, the shooting continues. Nevertheless improvements eventually appear at Horner. Much needed cleanups and repairs are made and anti-drug and gang programs crop up.

Lafeyette is arrested for allegedly breaking into a truck near the stadium and taking some goods, along with four other boys. Lafeyette claims he did not know the boys and was just walking by when the incident happened. LaJoe goes with Lafeyette to the detention center for his initial hearing and, after hours of waiting and poor treatment, they are given a court date in September. Lafeyette takes his anger and rage out on his father. He accuses Paul of being a drug addict and a failure. Paul backs down from the fight realizing that drugs have damaged his relationship with his children and he has let his family down. LaJoe goes with Lafeyette to his court hearing. The public defender can only spend a few minutes with the accused boys but is sure she can get most of them off as there are no witnesses to the actual crime and questionable police accounts. However, the judge thinks differently and finds them guilty. Lafeyette is given a year's probation and is required to perform a hundred hours of community service at the Boys Club.

With help from the author, both brothers get into a strict parochial school named Providence-St. Mel. A year later Pharoah is thriving at the school but Lafeyette has goes back to public school as he finds the work too challenging. He also finds it hard to avoid the lure of the streets and is caught smoking marijuana. He promises his mother he will do better. In June 1990 Lafeyette, now fifteen, graduates from eighth grade. He plans to attend a parochial school that isn't as academically rigorous as Providence-St. Mel. One thing that hasn't changed in Horner is the level of violence. LaJo tries to move but is ripped off in a scam and loses an eighty dollar deposit. She is depressed and humiliated as the family has been bragging about the move. The future looks uncertain for the Rivers as they are forced to remain in the same environment. At least the brothers are alive and still at home and Pharoah offers a spark of hope for the future.

More summaries and resources for teaching or studying There Are No Children Here.

There Are No Children Here from BookRags. (c)2022 BookRags, Inc. All rights reserved.