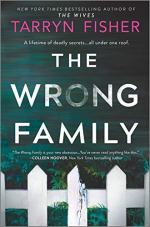 Tarryn Fisher
This Study Guide consists of approximately 34 pages of chapter summaries, quotes, character analysis, themes, and more - everything you need to sharpen your knowledge of The Wrong Family.

In Chapter 14, "Winnie," Nigel has been sleeping in his den. Winnie decides to make a plan "instead of sitting around being useless" (130). At the computer, she notices "deep grooves" pressed into her notepad (130). Someone has recorded several women's names. Nigel must be cheating. On Google, one of the names belongs to a missing child.

In Chapter 15, "Juno,” Juno finds a "fireproof lockbox” in Winnie’s nightstand (138). She notices Samuel's birth certificate is missing. She also finds an envelope filled with bloody scraps of cloth, and two police reports. She wonders if no one had looked for Samuel because no one had known his mother "had even been pregnant" (142).

In Chapter 16, "Winnie," Winnie is distracted at work thinking about her past. She had had a habit of becoming "too involved with her patients" (144). Wishing she could undo everything, she is desperate to talk to...

More summaries and resources for teaching or studying The Wrong Family.