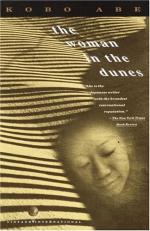 The Woman in the Dunes Summary & Study Guide

Kobo Abe
This Study Guide consists of approximately 27 pages of chapter summaries, quotes, character analysis, themes, and more - everything you need to sharpen your knowledge of The Woman in the Dunes.

The Woman in the Dunes Summary & Study Guide Description

The Woman in the Dunes Summary & Study Guide includes comprehensive information and analysis to help you understand the book. This study guide contains the following sections:

This detailed literature summary also contains Topics for Discussion on The Woman in the Dunes by Kobo Abe.

Kobo Abe was one of Japan’s most famous novelists of the 20th century, winning a number of awards and prizes both nationally and internationally. Following the publication of The Woman in the Dunes in 1962, he received international attention and praise, and his works were widely translated and published. Besides telling the harrowing tale of a man forced to live in a sand hole in an isolated village, his novel also presents a number of ideas about modern living and how people define their existence.

The novel follows an isolated schoolteacher, Niki Junpei, tired of living the same routine with no purpose in his life, who leaves for a vacation and never returns. He intends to find an undiscovered beetle by the sea and earn himself a place in encyclopedias by its discovery and thus justify the significance of his life. However, after he passes through a small, poor village and sees a number of deep holes with houses at the bottom, an old man comes up to him and asks him what he is doing.

After the old man realizes Junpei isn’t a government inspector, he offers him lodging in a dilapidated house at the bottom of one of the holes. Junpei climbs down the rope ladder and meets a woman in her thirties, who welcomes him and makes him dinner. At night, he’s surprised to find that she shovels the sand that has accumulated in the hole into cans that are then hauled up by crews at the top. He offers to help, but after he realizes she does this monotonous task all night, every night, he loses patience and goes into the house to sleep.

The next morning, he finds the rope ladder has been removed and as the sand walls can’t be climbed without it, he has been trapped. Uncertainty gives way to fear and then rage, as the woman explains that she needs another person to help her dig out the sand every night, protecting the village houses from collapsing under sand slides. He becomes dehydrated trying to climb the wall in the unbearable heat, falls, hurts his shoulder, and passes out. He recovers after a few days and takes her hostage, hoping the villagers will let him go in exchange for her safety, and when that doesn’t work he doesn’t let her work on the sand walls so the village will be in danger. But, he has to give up that plan because they ran out of water and have to ask the village for more.

His other plan to escape almost succeeds, as he manages to climb out of the hole with some rope that he made and walks towards the road, but he loses his sense of direction and ends up walking right into the center of the village. They catch him later when he runs into a sand sinkhole, and calls for help. After that attempt, the months pass and he and the woman work on the sand walls without escaping. She strings and sells beads to earn money for a radio, and he works on a project to catch a crow, hoping to tie a note to its foot and let it go. Despite the daily work that they accomplish, Junpei feels that he is deceiving himself and can’t stand living in the hole.

Although his trap doesn’t work, he does discover he can collect water from the dampness in the ground and save it in the bucket. With their radio, he listens to the weather reports and keeps a record of rainfalls and his average collection, so that one day they can hold out digging for the village in exchange for their freedom, or some other ploy. In the spring, however, the woman realizes she’s pregnant and it turns out she has an extra-uterine pregnancy, requiring the villagers to take her to a doctor. They leave the rope ladder hanging down the wall and Junpei climbs up, then sees his water project and, realizing he wants to show it someday to someone who will appreciate his work, climbs back down into the hole and waits.

More summaries and resources for teaching or studying The Woman in the Dunes.

The Woman in the Dunes from BookRags. (c)2022 BookRags, Inc. All rights reserved.