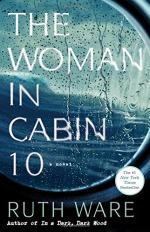 Ware, Ruth
This Study Guide consists of approximately 67 pages of chapter summaries, quotes, character analysis, themes, and more - everything you need to sharpen your knowledge of The Woman in Cabin 10.

The Woman in Cabin 10 Summary & Study Guide includes comprehensive information and analysis to help you understand the book. This study guide contains the following sections:

This detailed literature summary also contains Quotes and a Free Quiz on The Woman in Cabin 10 by Ware, Ruth.

The following version of the novel was used to create this study guide: Ware, Ruth. The Woman in Cabin 10. Gallery/Scout Press, April 11, 2017. Kindle.

In The Woman in Cabin 10 by Ruth Ware, journalist Laura “Lo” Blacklock was determined that she had witnessed a murder in the cruise ship cabin next to hers even though no one wanted to believe her. Despite the fact she was accused of making up the story for attention, she was ordered anonymously to stop digging into the crime. She noticed that evidence was being destroyed, but Lo continued to try to find out what had happened to the mysterious girl whom she had seen in the cabin next to hers but no one else seemed to believe existed. When Lo’s life was in danger, would the girl whom Lo had fought so hard to find justice for return the favor for Lo?

Lo was still reeling from a break-in at her apartment when she boarded the Aurora, a boutique cruise ship, for a week-long cruise as part of a work assignment. She had not slept since the break-in two days before and was already jittery with sleep deprivation. Her first night on the ship Lo was awakened by what she believed was the sound of a body being thrown over the balcony of the cabin next door. Fearing that the strange girl from whom she had borrowed a tube of mascara earlier that day had come to a terrible fate, Lo called the ship’s security. Nilsson informed Lo that no one was staying in the cabin next door to hers and even let Lo look at the empty, meticulously clean cabin. The blood smear that Lo had seen earlier on the balcony was also gone by the time Nilsson arrived.

Because Lo remembered what it was like to be a victim, she made it her mission to find out what had happened to the girl. Nilsson took her to talk to the members of the staff, but no one remembered seeing a girl who fit the description of the girl Lo described. He said it was a man who was supposed to have stayed in Cabin 10. Lo learned later that man had not joined the cruise because he had a break-in at his home, just like the break-in at her apartment a few days before the ship was to leave. Lo had the tube of mascara the girl had loaned her as proof the girl existed; but the lipstick disappeared from her cabin one day while she was away. She found a picture of the girl on Cole’s camera, but the camera wound up ruined, “accidentally” knocked into a hot tub. Lo had seen the camera sitting on the floor, not the edge of the hot tub.

On the day that she was going to talk to the police in Trondheim, the city at which the ship would be docking, Lo saw the girl again. She followed her to a dark stairway where the girl knocked Lo unconscious and locked her in a cabin on one of the ship’s bottom decks. Lo was held prisoner there for five days where she began to put together information about what had happened and realized that the girl was part of a plan to kill Anne Bullmer, the heiress wife of Richard Bullmer, owner of the Aurora, for her money. Lo pleaded with the girl for her release and, eventually, convinced her to let her go. Lo felt guilty she had left the girl behind until she learned that Bullmer had also been found dead. It was determined he had been murdered.

More summaries and resources for teaching or studying The Woman in Cabin 10.

The Woman in Cabin 10 from BookRags. (c)2022 BookRags, Inc. All rights reserved.