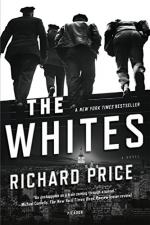 Richard Price
This Study Guide consists of approximately 48 pages of chapter summaries, quotes, character analysis, themes, and more - everything you need to sharpen your knowledge of The Whites.

The Whites Summary & Study Guide includes comprehensive information and analysis to help you understand the book. This study guide contains the following sections:

This detailed literature summary also contains Quotes and a Free Quiz on The Whites by Richard Price.

“The Whites” is a contemporary detective novel by Richard Price. The story is set in New York where Billy Graves, a sergeant detective on Night Watch, must work to uncover the truth behind the killings of criminals from his past. He must also protect his family from a stalker in the present. Billy's assignment to Night Watch is due to his accidental, nonfatal shooting of a ten-year-old boy several years before when he was part of an East Bronx unit nicknamed the “Wild Geese.” The Wild Geese were well-loved and well-respected for their ability to work with members of the community and for their fearlessness in putting down serious crime. However, the accidental shooting was the beginning of the end, as one by one, the unit broke up. With the exception of Billy, all the former Wild Geese have gone back into civilian life –including real estate king John Pavlicek to building superintendent Jimmy Whelan to funeral home owner Redman Brown. Billy’s own first marriage ended because of the shooting. Now remarried to a kind nurse named Carmen, Billy has two young sons, Declan and Carlos. Billy's elderly father, a former officer, live with Billy and his family.

Billy responds to a call for the Saint Patrick’s Day night murder at Penn Station, where the victim has been slashed with a knife. Billy discovers the victim to be Jeffrey Bannion, the White belonging to Pavlicek. Whites are criminals who have escaped justice. Each member of the Wild Geese has one. Criminal activities have killed some, while others have gone on to live as normally as they can. Others continue committing more crimes. Some former Wild Geese, like Yasmeen Assaf-Doyle, are emotionally distraught by their Whites. Others, like Pavlicek, are furious that their Whites still walk around free. The Wild Geese get together each month for dinner, and news of a dead White is always met with cheerfulness. Despite the death of Bannion being nothing, which bothers Billy due to Bannion’s sexual abuse of children, Billy is still determined to find the killer.

As Billy begins his investigation, he notices that Pavlicek goes through periods of extreme exhaustion. Stacey Taylor, a former reporter who is now an investigator, reaches out to Billy. Ironically, at one time Stacey had almost ruined Billy’s career with an unsubstantiated story that Billy was high on cocaine at the time of the accidental shooting. She and Billy have become friends since the story. Now, from Stacey, Billy learns that Pavlicek has been to see a hematologist. He later discovers that Eric Cortez, Yasmeen’s White, lies brain dead in an institution. A shot to the head is the reason for his condition. Later, Billy discovers that Sweetpea Harris, Redman Brown’s White, is dead because of a gunshot. Billy begins to suspect that Pavlicek is responsible. However, his queries to the other former Wild Geese lead to nothing except dismissals. They urge Billy to leave things alone. Their actions increase Billy’s suspicions.

At the same time, a police detective named Milton Ramos begins to stalk Billy and his family. Ramos savagely beats up Carmen’s gay brother, Victor. Ramos wants revenge on Carmen who, at the age of fifteen some years before, directed gang members to the Ramos apartment when the gang members sought a drug dealer. Milton’s older brother, Rudy, had broken Carmen’s heart, leading her to direct the killers to the wrong apartment for revenge. Both of Milton’s brothers were subsequently killed, and his mother later died of a broken heart. While Billy does his best to protect the family, he also confronts the Wild Geese about the killings once more. Admittedly, most of the Wild Geese, not just Pavlicek, are responsible for killing the Whites of each other, rather than their own. Pavlicek’s bright and kindhearted son is dying of leukemia. The White Geese are angry that while someone like Pavlicek’s good son may suffer and die, bad people walk around free. Billy wrestles with his conscience as he considers turning in the Wild Geese. Carmen tells Billy to let it go.

Milton Ramos confronts Billy and Carmen in their home at gunpoint. The timely arrival of the police foils Milton’s plans to kill Carmen. Carmen then confesses her past to Billy and urges him once more to let things be as they are with the Wild Geese. Ultimately, Billy decides that it would not be worth it to turn in the Wild Geese, even though they broke laws to serve justice. Billy considers this from his own standpoint because it was true that Billy was high on cocaine during the accidental shooting years ago. As the novel ends, Billy heads out on Night Watch, where he responds to a smash-and-grab at a jewelry store. The capture of the robber is successful, as well as the return of the jewels.

More summaries and resources for teaching or studying The Whites.

The Whites from BookRags. (c)2022 BookRags, Inc. All rights reserved.