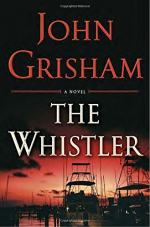 Related Topics
A Time to Kill
John Grisham
The Brethren
The Broker
The Chamber
The Client
The Firm
The Last Juror
The Pelican Brief
The Racketeer
The Rainmaker
The Runaway Jury
The Testament
Sycamore Row
Gray Mountain
Camino Island
The Rooster Bar
The Reckoning: A Novel
The Innocent Man
The Summons
Witness to a Trial
The Guardians: A Novel
Camino Wind
A Time For Mercy
Sooley
Calico Joe
The Judge's List
Sparring Partners

John Grisham
This Study Guide consists of approximately 78 pages of chapter summaries, quotes, character analysis, themes, and more - everything you need to sharpen your knowledge of The Whistler.

The Whistler Summary & Study Guide includes comprehensive information and analysis to help you understand the book. This study guide contains the following sections:

This detailed literature summary also contains Quotes and a Free Quiz on The Whistler by John Grisham.

The following version of the novel was used to create this study guide: Grisham, John. The Whistler. Doubleday, October 25, 2016. Kindle.

A corrupt judge, theft from an Indian casino, a fatal car wreck, and disappearing witnesses converge in John Grisham’s The Whistler. Lacy Stoltz, a worker with the Board on Judicial Conduct, got more than she bargained for when she accepted the invitation to investigate what a contact called the most corrupt judge in American history. The novel explores the ease of exploiting the sovereign governments of Indian reservations as well as the way money can be used as a motivator to encourage people to participate in illegal activities.

Lacy and her partner, Hugo Hatch, went to St. Augustine to meet with Greg Myers, a man who wanted to file a formal complaint on Circuit Court Judge Claudia McDover. He and two other people, including a mole who worked with McDover, believed that McDover had gotten condos as payments for her influence in the building of a casino on Indian territory. McDover was not only given condos, she was making a good deal of money from her portion of funds stolen from the casino by Vonn Dubose, leader of a group known as the Coast Mafia.

Not far into their investigation, Lacy and Hugo are lured onto the reservation where the casino was located by a man who promised to talk to them about the corruption in the casino. Instead of getting information from an informant, Lacy and Hugo were hit head-on by a Dodge Ram, badly injuring Lacy and killing Hugo. Although tragic, it was through this wreck that the first real break in the case came when investigators were able to identify the driver of the truck that hit Lacy’s car.

With the FBI’s help, Lacy’s initial investigation leads to the discovery of a witness embedded in Dubose’s gang. Testimony breaks the case open and all five major members of Dubose’s gang as well as the dirty judge are arrested.

More summaries and resources for teaching or studying The Whistler.

The Whistler from BookRags. (c)2022 BookRags, Inc. All rights reserved.