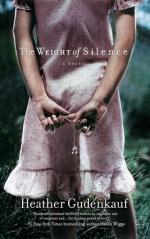 Heather Gudenkauf
This Study Guide consists of approximately 47 pages of chapter summaries, quotes, character analysis, themes, and more - everything you need to sharpen your knowledge of The Weight of Silence.

Antonia looks at her daughter while her son is tended to. Even in her sleep, she shows signs of distress. Antonia decides to stay the night, but she wants to go home and get her daughter's favorite stuffed animal. A paramedic had offered to help her, and she figured she could get a ride to her house from the woman.

The police go through the words and look closely at the dead dog. Louis wonders if he let Wilson go too early. He checks in with Fitzgerald and finds out that Petra is unconscious but stable. Fitzgerald is upset with Louis for letting Martin go up the bluff, and Louis tries to explain that he didn't have a choice. He explains everything that happened, and Agent Simon decides that they need to go to the hospital to talk with Calli.

More summaries and resources for teaching or studying The Weight of Silence.

The Weight of Silence from BookRags. (c)2022 BookRags, Inc. All rights reserved.