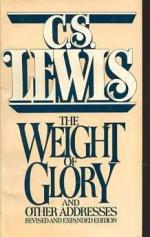 Plot Summary
+Chapters Summary and Analysis
The Weight of Glory
Learning in War-time
Why I am Not a Pacifist
Transposition
Is Theology Poetry?
The Inner Ring
Membership
On Forgiveness
Slip of the Tongue
Free Quiz
Characters
Objects/Places
Themes
Style
Quotes
Topics for Discussion
Order our The Weight of Glory and Other Addresses Study Guide

The Weight of Glory and Other Addresses Summary & Study Guide

C. S. Lewis
This Study Guide consists of approximately 31 pages of chapter summaries, quotes, character analysis, themes, and more - everything you need to sharpen your knowledge of The Weight of Glory and Other Addresses.

The Weight of Glory and Other Addresses Summary & Study Guide Description

The Weight of Glory and Other Addresses Summary & Study Guide includes comprehensive information and analysis to help you understand the book. This study guide contains the following sections:

This detailed literature summary also contains Topics for Discussion and a Free Quiz on The Weight of Glory and Other Addresses by C. S. Lewis.

This volume contains nine of C.S. Lewis's sermons. Originally, he gave the sermons to college students in England. He carefully and thoroughly argues each viewpoint, using a careful, almost scientific approach in his arguments. The language of his sermons is that of a highly educated man, which reflects his audience. The combination of these two aspects of the sermons makes some of the arguments complicated and hard to follow.

Lewis, however, continues his reputation for honest and profound observations both of the spiritual and the carnal world. He honestly expresses his own weaknesses in respect to his own devotion.

However, he also gives his advice for dealing with such struggles. The viewpoints of others, such as pacifists and evolutionists, receive the same honest speculation, however. Sometimes, surprisingly, Lewis agrees with parts of the opposition. Quickly, though, he refutes such arguments with his own careful and logical response.

The topics range from war to the afterlife. He never fails to apply his topics directly to his audience. Sometimes he speaks on topics requested by others, and sometimes the topic seems to be of his own choosing. Each sermon exists independently, though. He never refers back to previous sermons within this volume. The time line among the sermons is, in fact, unclear. One assumes they were given in order, but no evidence of this exists.

The reader feels the passion of the speaker, even if the reader doesn't agree with his points. Though Lewis gave the sermons some time ago, their truths apply in a largely timeless fashion to any time and culture. What's more, even in the printed form, the arguments retain much of their impact. Few clues about the speaker's delivery remain.

Lewis offers no apologies for his views about Christianity. In fact, he refutes many other beliefs systems in favor of Christianity. His arguments appear so clearly and concisely that the reader, though he may disagree, may have a difficult time refuting Lewis.

The language of the volume clues the reader in to the period of time the sermons were given: the early twentieth century. Difficulties in understanding Lewis stem not from differing language due to time or space, however.

Instead, Lewis's education may make the sermons difficult to understand. Frequently, he refers to Latin terms while offering no explanation. Often, though, context clues offer help in figuring out the meaning of such statements.

More summaries and resources for teaching or studying The Weight of Glory and Other Addresses.

The Weight of Glory and Other Addresses from BookRags. (c)2022 BookRags, Inc. All rights reserved.