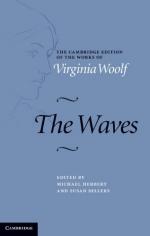 Get The Waves from Amazon.com
View the Study Pack
View the Lesson Plans
Study Guide
Order our The Waves Study Guide

Virginia Woolf
This Study Guide consists of approximately 37 pages of chapter summaries, quotes, character analysis, themes, and more - everything you need to sharpen your knowledge of The Waves.

The Waves Summary & Study Guide includes comprehensive information and analysis to help you understand the book. This study guide contains the following sections:

This detailed literature summary also contains Topics for Discussion and a Free Quiz on The Waves by Virginia Woolf.

The Waves follows the lives of six friends, Jinny, Bernard, Neville, Louis, Susan and Rhoda. Each of the nine sections begins with a description of the sea, its surroundings and the position of the sun in the sky. The description goes from very early morning in the first section, when the characters are children, to the end of the day when the character are moving toward the end of their lives. With the use of monologue, stream of consciousness and structure, the book shows the friends as one entity, detailing how the individual struggles when they try to move away on their own.

The first section describes the sun rising and the day gradually coming to life. The story begins with a short monologue from each character that relates to an early morning scene. The section then explores the character's personalities during childhood and the time they spend together at day school.

The second section describes the sun still rising, but the waves are getting rougher. The story begins by describing the girls and boys leaving for separate boarding schools. As the section continues, the character's monologues detail their reactions to being at boarding school and their time back at home during the holidays. This section introduces the male character, Percival. Percival does not have a monologue, but he plays an important role in all the character lives. By the end of the section, the characters divide even further. Susan goes back home, Neville and Bernard go to university, Rhoda and Jinny go to London and Louis goes straight into a job.

At the beginning of the third section, the sun has risen and the birds are in full song. The characters are now trying to refine their personalities, whilst still struggling to come to terms with themselves. Bernard and Neville attend the same college. Bernard is trying to develop himself as a man of words, constantly observing others, while Neville studies literature and dreams about Percival. Louis is living in London and working as a clerk. Rhoda and Jinny socialize in the same circles in London. However, while Jinny loves the social scene, Rhoda dislikes it immensely and withdraws further into herself. Susan moves back home to the countryside, which she finds more to her preference than the places she had lived during her education.

The fourth section begins by describing the sun at its brightest. Bernard's monologue begins the section and he immediately announces his wedding engagement. Bernard is on his way to London to meet the others for a farewell dinner in honor of Percival moving away to India. It is the first time since childhood that they have met as one group and their monologues display their nervousness. Percival is the last character to get to the restaurant and upon his arrival, all the characters relax.

The beginning of the fifth section describes the sun at its full height and the waves breaking strongly onto the shore. It is a prelude to the first real tragedy of the story, the death of Percival. This section looks at how Neville, Bernard and Rhoda deal with his death. Neville is distraught. Bernard is upset but Percival's death coincides with the birth of his first child. To Rhoda, the death confirms the emptiness of her life.

The sixth section begins with sun starting to go down and the waves moving out, crashing against rocks and flowing into caves. This section looks at the six characters as mature adults who are moving along their chosen paths. Susan and Bernard seem the most content of the characters and are both married with children. The homosexual Neville and the sociable Jinny are closest to achieving their aims, both living life to the full. Louis is finding success at work, whilst embarking on an affair with the unhappy Rhoda. The death of Percival hangs over all of them, but particularly Neville, who compares all his conquests to his first love.

The seventh section starts with the sun lower in the sky and the waves falling back. Each character has now reached middle age and their monologues reflect back on their lives. Bernard reflects on a disappointing life and his recent break from his wife while wandering around Rome. Susan is content in the countryside, but remembers the past with longing. Jinny reflects on middle age in terms of her own looks and tries to convince herself that young men are still attracted to her. Louis continues to succeed at work, but strives to express his more soulful side. Rhoda's reflections take place in Spain. She has broken up with Louis, but she is no happier for doing so and contemplates suicide while standing on a cliff edge. Neville is a writer, but like Jinny feels the effects of middle age on his appearance.

The eighth section describes the sun sinking and birds of prey, such as an owl, replace the chirping birds from earlier descriptions. The six friends again meet for dinner at Hampton Court. Like the previous meeting, it begins uneasily before developing into something more comfortable. At the end of their meal, the characters put previous rifts to one side and go for a walk through Hampton Park. Most notably Louis and Rhoda discuss their break up.

In the ninth section, the sun has goes down and the day finishes. This part includes an only monologue by Bernard. Throughout the novel, he has always been the best storyteller and he now explains his life story to an unknown dinner companion. Bernard describes the others and his own life with a fighting spirit. At the end, he decides to leaves his phrase book behind in the restaurant in an attempt to return to the simple phrasing of his childhood.

More summaries and resources for teaching or studying The Waves.

The Waves from BookRags. (c)2022 BookRags, Inc. All rights reserved.