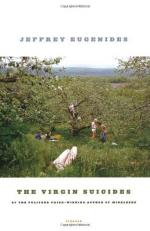 This detailed literature summary also contains Topics for Discussion and a Free Quiz on The Virgin Suicides by Jeffrey Eugenides.

The Virgin Suicides by Jeffrey Eugenides reads like a postmortem investigation into the lives and deaths of five young American girls growing up in a suburb. From the onset of the novel, the reader is made aware of the outcome. The story takes place in the early 1970s, somewhere in the heart of America. The novel is narrated approximately 20 years after the events by a group of middle-aged men who were then teenagers living in the same neighborhood and obsessed by the five ill-fated heroines of the book. The story unfolds at a lingering pace as it catalogs the slow decay of a community who gave up its power in exchange for a passive, manufactured brand of happiness.

The book opens with the scene of an ambulance coming in to pick up the body of Mary, the last of the five Lisbon sisters to take her own life. The scene is observed passively by a few young teenagers gathered inside a house across the street. The novel then proceeds as a flashback, recounting with ample detail the 13 months leading to this final, dramatic outcome.

Thirteen-year-old Cecilia Lisbon, the youngest of the five blonde daughters of a middle-aged suburban couple, was found lying in her bathtub with her wrists slit open. She is saved at the last moment by the paramedics. After Cecilia's brief stay in the hospital, the Lisbons invite the neighborhood boys to a chaperoned party. The young guests realize that fourteen-year-old Lux epitomizes their fascination about the Lisbon girls. During the party, Cecilia disappears and jumps to her death from her bedroom window. The paramedics remove Cecilia's body. She is given last rites and taken to a temporary mortuary freezer where her body waits for the cemetery workers' strike to end. The boys' obsession deepens when they manage to get their hands on Cecilia's diary and read it to each other. However, the motives for the girls' self-inflicted deaths remain a mystery.

The neighborhood fathers remove the fence and proceed to clean the area of the dead bugs for summer. The Lisbon family members remain oblivious to everything that goes on around them. Early in the new school year, Trip Fontaine, a Romeo for all the Juliets of the suburb, falls in love at first sight with fourteen-year-old Lux Lisbon. He manages to get invited into her home and earns himself an illicit kissing session inside his car at the end of the evening. After the escapade, Lux is grounded by her mother. Around that time, the local press publishes a belated article about the first suicide. The local television channel airs a program that interviews suicidal teenagers and a mail campaign intended to raise public awareness to the problem of teenage suicide follows. The girls' high school organizes a Day of Grieving as a mean of helping the students cope with the tragedy. Little is accomplished and the Lisbon sisters manage to avoid the event completely by hiding in the school's bathroom. A social worker hired by the school tries to help the sisters, but the effects are marginal and short lived at best. The girls are allowed by their restrictive parents to attend Homecoming with the other students. As a result, the luckiest of the neighborhood boys gets to date a Lisbon sister for the evening while Lux is accompanied by Trip. The two teenagers are crowned at the end of the evening as king and queen of the homecoming dance. Trip then takes Lux to the football field, makes love to her and immediately dumps her. Lux is left to walk back home by herself and misses her mother's strict curfew by over an hour.

As a result of her daughter's disobedience, Mrs. Lisbon imposes a lock down on the house. She orders Lux to destroy all her rock records, and the girls are confined to the house. They stop attending school. The house is left uncared for, and the girls live in an increasingly dirty and decaying environment. Spying on the Lisbons' house, the boys are spectators to Lux's repeated sexual encounters with strange men on the roof. A few weeks go by, and Lux is taken to the hospital following a stomach ache. She faked the disease in order to get a pregnancy test. Mr. Lisbon is forced to quit his job as a teacher at the school after being vilified by the parents for his handling of the crisis at home. This furthers the decay of the Lisbons' house and, by now, an overpowering stench emanates from the building. It looks as though the girls are leading regular teenager lives, even though they are locked inside their home and are showing obvious signs of physical decline. An experienced local grandmother suggests that suicide is a logical option for the girls, and she admits to sympathizing with them. By springtime, the city workers, acting on an ordinance from the city, come to cut down the disease-ridden tree planted in the Lisbon's yard. The four girls interfere, and the workers are forced to postpone the removal indefinitely. Later that summer, mysterious messages from the girls to the boys begin to appear in the neighborhood. Both groups manage to communicate on the phone by playing popular songs to each other. At midnight on June 15, the boys act on a note left in their mailbox and enter the Lisbons' home. They are attempting to rescue the girls. Lux stalls them for a while and disappears. The boys then roam the house looking for the girls only to stumble upon dead bodies. Each of the four girls has attempted suicide, and only Mary survived.

The psychiatrist puts Mary on a combination of pills and therapy while the media tries to piece together an image of the tragic events. Neither result proves convincing, and the community as a whole considers Mary as good as dead. The Lisbons put their house up for sale. On the day the cemetery strike comes to an end, a month after her first suicide attempt, Mary's dead body is picked up by the paramedics. She overdosed on sleeping pills. The Lisbon parents leave the suburb for good and, while the cemetery is restored to its pristine state, the whole suburb starts to decay. Two decades later, the boys are now grown up men old enough to tell about their experience. However, they never grew out of their suburb and the unsolved mystery of the five virgin suicides still haunts them.