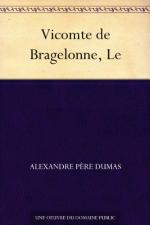 Alexandre Dumas, père
This Study Guide consists of approximately 33 pages of chapter summaries, quotes, character analysis, themes, and more - everything you need to sharpen your knowledge of The Vicomte de Bragelonne.

Raoul arrives at Blois to inform Gaston of the arrival of King Louis XIV, Gaston's nephew. In Blois, Raoul meets and instantly falls in love with a young lady in the court, Louise de la Vallière.

Raoul goes to la Fere to visit his father before returning to Blois to await the king's arrival. While Louis is at Blois, he is approached by Charles II, the recently deposed King of England. Charles asks for Louis' help in regaining the throne. Louis, who lacks any type of power as a king, asks Mazarin, his finance minister, for one million livres to assist Charles. Mazarin refuses and Charles is sent away.

Later, Charles happens to meet Athos at la Fere. Athos agrees to help Charles by retrieving a fortune he had buried in Newcastle. Athos is successful in his quest. Meanwhile, d'Artagnan has been dispensed to kidnap the powerful General Monk. D'Artagnan takes Monk to meet with Charles. Monk is uncommunicative but decides to help Charles regain his throne. Both Athos and d'Artagnan are handsomely rewarded.

Cardinal Mazarin dies. At this point Louis decides that it is time that he steps up to the task of running the government rather than leaving the job to his ministers. The ministers have no intention of giving up their power, particularly the wealthy and corrupt Fouquet. M. Colbert is assigned to be a councilor to Louis. Fouquet and Colbert enter into a battle to take control of the crown.

Aramis, Porthos, Athos and d'Artagnan take on different roles in attempting to keep the power in the right hands. D'Artagnan is beseeched to go to Belle-Isle to learn about the state of the island. If the land is being fortified with fortresses and soldiers, then it will be clear to Louis that Fouquet is planning to take over. Colbert is behind the scheme to discredit Fouquet and to claim the crown for his own.

D'Artagnan learns that Belle-Isle is being fortified. He also learns that his old friend Porthos is on the island, supposedly studying topography.

Porthos and d'Artagnan venture to visit Aramis, the Bishop of Vanne. Aramis figures out d'Artagnan's mission and immediately sends Porthos to Paris. Aramis soon follows with the intention of warning Fouquet of Colbert's plan.

D'Artagnan is sent on a wild goose chase just long enough for Porthos and Aramis to reach Paris. Aramis warns Fouquet about Colbert's plans. Fouquet goes to the king to explain the fortification of Belle-Isle while Colbert sits nearby, watching his plan fall apart.

More summaries and resources for teaching or studying The Vicomte de Bragelonne.