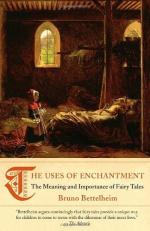 The Uses of Enchantment: The Meaning and Importance of Fairy Tales Setting & Symbolism

Bruno Bettelheim
This Study Guide consists of approximately 27 pages of chapter summaries, quotes, character analysis, themes, and more - everything you need to sharpen your knowledge of The Uses of Enchantment.

Magic spells are prevalent in fairy tales for a number of reasons. First and foremost, magic spells allow both villains and heroes to accomplish feats or overcome situations that may seem difficult or impossible to transcend in the eyes of a child.

One example of a positive magic spell can be seen in "Cinderella." Cinderella is a downtrodden and abused young girl who must endure the torture and jealous of her wicker stepmother and stepsisters. There seems to be no resolution to Cinderella's problems until a fairy godmother appears and grants Cinderella's wish to go to the ball in a beautiful gown. The magic spell leads to Cinderella marrying the prince and living happily ever after.

One negative use of magic can be seen in "The Fisherman and the Jinny." The Fisherman tries hard to catch food for his supper and struggles not to become frustrated...

More summaries and resources for teaching or studying The Uses of Enchantment: The Meaning and Importance of Fairy Tales.

The Uses of Enchantment: The Meaning and Importance of Fairy Tales from BookRags. (c)2022 BookRags, Inc. All rights reserved.