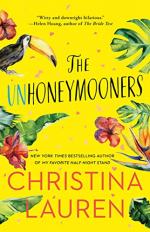 This Study Guide consists of approximately 92 pages of chapter summaries, quotes, character analysis, themes, and more - everything you need to sharpen your knowledge of The Unhoneymooners.

The Unhoneymooners Summary & Study Guide includes comprehensive information and analysis to help you understand the book. This study guide contains the following sections:

This detailed literature summary also contains Quotes and a Free Quiz on The Unhoneymooners by .

The following version of this book was used to create the guide: Lauren, Christina. The Unhoneymooners. Gallery Books, 2019. Paperback edition.

Olive Torres is known her notoriously bad luck. No matter what situation she finds herself in, she can’t seem to catch a break. This is made even more evident by the fact that her identical twin sister, Ami, has always been incredibly lucky.

Ami’s luck has consistently driven her to win just about anything she enters. Given this, it was unsurprising when she managed to finance almost the entire cost of her wedding by winning a series of contests. Despite how happy she is for her sister, Olive was less than thrilled to be a part of the celebration because it meant spending the day with the best man and her personal nemesis, Ethan Thomas. As the groom’s brother, Olive had come into contact more than a few times with Ethan and each occurrence had solidified her distain for him.

Determined to not let Ethan get the best of her, Olive prepared to take on Ami’s big day. By preoccupying herself with Ami’s seventy-four items to do list, Olive was relatively successful at avoiding Ethan altogether. However, at the reception, things took a surprising turn when the entire wedding party got food poisoning from the seafood buffet except for Ethan and Olive, as they had not eaten it.

Both Ami and her new husband, Dane, insisted that Olive and Ethan take their place on their honeymoon since they were too sick to go and they did not want their all-inclusive ten-day trip to Maui to go to waste. After some slight convincing, Olive ends up accepting their offer, but makes a mental note to let Ethan’s presence ruin her good fortune.

The unlikely pair flies off to Maui where they are forced to pretend they are a happily married couple. This proves infinitively harder when Olive’s new boss and Ethan’s ex-fiancé happen to be staying at the same resort. Suddenly pressured by the fear of getting caught using Ami’s honeymoon and potentially losing the vacation altogether, Olive convinces Ethan to commit to the lie.

As they begin to spend more time together, suddenly Olive feels her luck beginning to change as well as her feelings toward Ethan. The more that Olive learns about Ethan, she begins to see how off her initial impression of him actually was. The two grow close over the short time together and leave the island as lovers.

After returning home from Maui, real life begins to set in and with it, a whole new set of problems involving family members on both sides. Olive is convinced that Dane had cheated on Ami during the time that Ami had thought they were exclusive. Ethan refuses to believe that his brother would have ever done something like that without Ami knowing and approving of the situation. Both are torn between two very different opinions and feel compelled to protect their family, forcing the pair to break up. In the aftermath of the fight, a devastated Olive has to face not only with her own feelings but also with sharing the news of Dane’s infidelity with her twin. As expected, Ami is in disbelief of Dane’s actions and Olive is faced with yet another loss when her sister reacts to the news by ignoring Olive’s attempts to reconcile.

Despite her upset over losing Ethan and Ami, this time alone forces Olive to cope with the reality of her lifelong bad luck and pushes her take ownership for her shortcomings. She gains a newfound sense of self-acceptance and realizes how her own perceptions played a large part in the outcome of numerous situations.

Ultimately Ami reaches back out to Olive after confirmation that Dane had in fact cheated. The news of Dane’s lies gets back to Ethan and with some help from Ami the couple are eventually reunited. While Olive struggles to forgive Ethan’s instant dismissal of her feelings and opinions, Ethan’s persistent apologies prompt an open and honest conversation about trust that develops into Olive giving him another shot.

Two years later, Ethan and Olive head back to Maui, this time accompanied by Ami and her new boyfriend, Lucas. Narrated through Ethan’s point of view, the two embark on an adventure to enjoy the island that brought them together in the first place. On the last night of their vacation, Ethan proposes to Olive who happily accepts.

More summaries and resources for teaching or studying The Unhoneymooners.

The Unhoneymooners from BookRags. (c)2022 BookRags, Inc. All rights reserved.