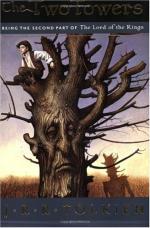 Faramir gives the hobbits food and he and his men lead them out of their land. Gollum, Frodo and Sam march on to Cirith Ungol. Gollum disappears when they stop for their rest and does not reappear until it is time to start their journey again. He returns and tells them they must hurry, but will not tell them where he has been or why they must hurry. They come to the Crossroads. The Orcs have vandalized the statue of the King of Gondor — its head has been knocked off and lies near the roadside. The head is ringed by a trailing plant with small white flowers that looks like a coronal.

Gollum’s sense of urgency tells the reader that he is up to something. He has been off on his own and the reader can only guess what kind of plans he...