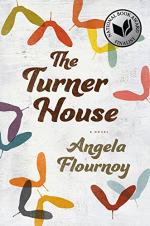 This detailed literature summary also contains Quotes and a Free Quiz on The Turner House by Angela Flournoy.

The Turner House by Angela Flournoy is a novel that follows Francis and Viola Turner as they find their way out of the poverty of sharecropping in Arkansas to Detroit where they eventually raise a family of thirteen children, most of them in a house on Yarrow Street - a house with more room than anywhere they'd ever lived before and that gave them hope for the future.

In 1958, Francis and Viola’s eldest son Charles encountered a spirit or ‘haint’ that tried to drag him out of the window. Charles was 14 and he’d just decided to take over a small whatnot room to give himself space from his many siblings at night when the haint attacked. He fought back. Francey, the oldest girl finally dragged him out of the room. When his father comes, summoned by the commotion, the haint is gone and he tells Charles in no uncertain terms that haints don’t exist in Detroit and based on his experience, they didn’t. Charles sees the haint again in his life but he doesn’t learn about his father’s experiences until his mother finally admits the truth after she’d begun living with him and his wife Tina, too old to live on her own in the Yarrow Street house, which now sat empty.

The empty house is fortuitous for Lelah, the youngest of the thirteen Turner siblings who struggles with an addiction to gambling. Suspended from her job for borrowing money from many of her co-workers, Lelah has also been evicted for non-payment of rent; the bailiffs standing in her living room as she grabs what she can. She drives to the house on Yarrow and stays there for a time, taking her grandson Bobby to the library while her daughter Brianne is at work.

In 1944, as a younger man, Francis Turner was on the path to priesthood, living in the church under the guidance of Reverend Tufts. His mother sent money regularly for his care and he grew up in service to the church. Having lost his father early in life, Francis often felt abandoned so when he began to see a specter on a regular basis, he believed it was his father. He had no fear and likened it to the angel Gabriel when he finally told Reverend Tufts about it but his honesty is his undoing. Reverend Tufts had asked him why he felt he had a calling to the church. Rather than give him a spiritual diatribe, Francis told him about the ‘angel’ he regularly saw. Unfortunately, Reverend Tufts had no patience for the supernatural despite the fact that the bible is full of similar instances. Instead of advancing his charge into the priesthood, Reverend Tufts sends him to Detroit with a bland introduction to the pastor there. Francis’ young wife Viola and their son Charles are left behind. Francis reads the letter and is much too proud to go to a new church and beg for a position in the hopes it will lead to something so instead, he looks for work and finds a place to stay.

Francis falls off the rails for a time. He sleeps with the woman who runs the boarding house – Odella Withers, but when her husband unexpectedly returns from the war, Francis finds himself alone again. He realizes that ignoring his wife and young son is a mistake and saves up enough money to return and bring them back to Detroit with him. This occurs just after Reverend Tufts informed Viola that her husband had seen haints and was a heathen for having claimed it came from God. He’d likely succumbed to depravity he tells her as he puts his hand on her thigh, and feeling low she allows and encourages him. When her husband shows up on her doorstep and confesses his infidelity to her, she forgives him but she never tells anyone about Reverend Tufts and their intimacy. Instead, like Francis she resolves to make their marriage work. Thirteen children together are the testament to that resolve.

The Turner family is mostly happy. They gather for family events and though it feels like an invasion, they all dance and eat and enjoy each other. It is during the spring birthday celebration that Viola tells Charles that his father had seen haints as well. They hadn’t told him because it had always made Francis feel as though he was missing something or hadn’t resolved something. It created a life of uncertainty and Francis thought it would be easier for Charles if he simply thought they didn’t exist. By telling him, she gives him validation that he isn’t crazy, and the knowledge allows him to relax so that he and Tina can overcome the barrier caused by the haint’s existence and enjoy the spring birthdays together.