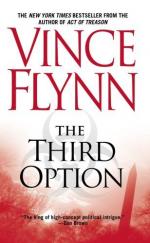 This detailed literature summary also contains Topics for Discussion and a Free Quiz on The Third Option by Vince Flynn.

The CIA sends their number one counter-terrorist Mitch Rapp to assassinate Count Heinrich Hagenmiller. It is Mitch's last assignment and he has a bad feeling it could all go wrong. Nevertheless, alongside his fellow CIA agents, Jane and Jim Hoffman, everything goes according to his plan. They get into the Count's house easily, and when the Count appears, Mitch wastes little time in shooting him between the eyes. When Mitch turns to Jane Hoffmann, she shoots him twice in the chest.

Meanwhile back in Washington Senator Clark meets with Albert Rudin. Rudin has a problem with the CIA and wants the government to replace its directors. He says this will not happen if they hire Irene Kennedy to take over from the current boss. Clark tells him not to worry because he thinks Kennedy will self-destruct.

Peter Cameron spies Jane Hoffmann leaving the Count's mansion by herself and presumes the mission has been a success. However, inside the mansion, Mitch stirs. He was wearing body armor, so he was only winded and has not received a scratch. Mitch quickly leaves the building, steals a car and heads for France.

Mitch hijacks a taxi and tells the driver to take him to Frankfurt. On the way, he destroys all the evidence that could link him to the Count, changes his clothes and cuts his hair. He uses the driver to book a hotel room before joining a group of cyclists riding to France. Meanwhile, the Jansen's have reported that Mitch is dead. Irene Kennedy is not sure so visits her boss, John Stansfield, at his home. Stansfield says that she should wait on news about Mitch and find out who is leaking information to the Secretary of State.

On a jet heading to Colorado, Cameron talks to the French assassin Gus Villaume. He has hired him to kill the Jansen's. On another plane heading the same direction, 3 former members of the Seal Six Team, chat about their latest assignment from the CIA. The leader and ex-commander, Scott Coleman says they have been hired to bring the Jansen's back to Washington.

Coleman and his men arrive in Colorado and take up a position above the Jansen's house. Meanwhile Cameron and Villlaume have set up a position 200 meters from the Jansen's front door. Cameron is lying in undergrowth with his sniper trained on the house. The Jansen's step out to leave, and he shoots them both dead.

Hank Clark gives Cameron orders to kill both Mitch and Villaume. Cameron hires the unstable Jeff Duser, and they both drive off to kill Villaume's friend Mario Lukas, the idea being Villaume is nothing without his friend. They set up an elaborate plan that involves a very public battle between Mario and Duser's men. While Mario is shooting, Duser comes from behind and kills him.

Hank Clark meets with Albert Rudin and Senator Midleton. Hank Clark is trying to get the two Democrats to oppose the president's likely hiring of Irene Kennedy as the CIA boss and therefore causing a split in the party. His plan seems to be working well, and he encourages Rudin to call Irene in front of his committee and force her to confess to the Count's assassination.

Meanwhile, Mitch is back in Washington. He finds a way to his friend Marcus Dumond's coffee shop, and they go back to Dumond's house. Marcus is a computer hacker for the CIA, and Mitch tells him to hack into the CIA's system and find him some information linked to his attempted assassination.

Irene Kennedy and Scott Coleman meet John Stansfield at his house. While they are chatting, Mitch breaks into the room with his gun trained at Irene. He demands to know why she ordered the Jansen's to kill him. Irene says she did not and talks Mitch's into putting down his weapon.

Cameron meets Clark. He tells the senator that he has recorded a conversation between Mitch and Anna. Hank tells him to break into Anna's apartment and find out as much information about her as possible. However, Clark is not happy. Lukas' killing brought unwanted attention and the only way to sort it out is to kill Cameron. When Cameron leaves, Clark gets in contact with the assassin Donatella Rahn and arranges for her to come to Washington.

Scott Coleman and Mitch Rapp join forces to find out who tried to kill Rapp. Mitch phones Villaume on his cell phone and asks him for some answers. Villaume says he is currently on the run from a man he knows as the professor and gives him his number. Mitch phones him and says they need to negotiate for his life.

Mitch's girlfriend Anna Rielly is kidnapped by the FBI and taken to Mitch's home in Maryland. Mitch guesses something is wrong and heads to Anna's apartment. No one is there, but he finds a listening device in the lounge, proving to him that Cameron has been after Anna. He phones Irene Kennedy and tells her to send him her best people.

Mitch and Coleman discover Anna is at Mitch's house in Maryland, and they organize a surveillance helicopter to hover above the house. With the help of thermal imaging, they can see there are three people in the house. One person leaves in a car and Mitch decides to follow. They catch up with the man at a gas station, pull him into their van and take him back to the house. Here they force him to knock on the door and ask where the girl is. As soon as the agent says the girl is upstairs, Mitch jumps from behind a car and shoots the man in the head. He then kills Duser and runs upstairs to Anna.

Mitch goes to Cameron's office to arrest him but finds him dead. Meanwhile, the President is on the warpath. He first meets with Midleton, forcing his resignation, and secondly questions Rudin on why he brought Kennedy in front of the committee. He makes it clear to both of them that by going behind his back, they have damaged their own party's reputation. The next person he sees is Mitch. He tells him he wants him to stay with the CIA, but as head of counter-terrorism. In other words, he will be legitimate. Mitch agrees.