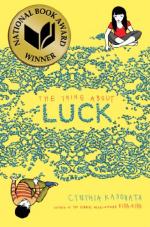 Related Topics
Cracker!: The Best Dog in Vietnam
A Place to Belong
Saucy

Cynthia Kadohata
This Study Guide consists of approximately 39 pages of chapter summaries, quotes, character analysis, themes, and more - everything you need to sharpen your knowledge of The Thing About Luck.

The Thing About Luck Summary & Study Guide includes comprehensive information and analysis to help you understand the book. This study guide contains the following sections:

This detailed literature summary also contains Quotes and a Free Quiz on The Thing About Luck by Cynthia Kadohata.

“The Thing about Luck” is the protagonist-narrated story of Summer, a twelve-year-old Japanese-American girl who, over the course of a season of hard work with her difficult family, comes to a greater understanding of herself, of her family and its heritage, and of her relationships. That understanding, a “coming of age” experience, includes the development of compassion for others and insight into their experiences and perspectives, as well as the confrontation of her own fears, doubts, and insecurities.

The novel begins with Summer’s introduction to the story – specifically, her commenting that it is the story of her family’s year of bad luck. That year, she says, began with her contracting malaria, a generally fatal tropical disease that she caught from what amounts to a rogue mosquito. This, she goes on to say, led her into an ambivalent, perhaps contradictory, relationship with mosquitoes – finding them both extremely beautiful and extremely dangerous. In the narrative’s early stages, she also describes the most important relationships in her life: with her younger brother Jaz (who, she says, “has issues”); with her demanding, unpredictable grandmother (whom Summer refers to by using the Japanese term “Obaachan”), and her quiet, loving, hardworking grandfather (whom she calls “Jiichan”).

Summer and her family are hired by Parker Harvesting Inc., a business that travels from farm to farm and helps farmers get their crops off the land. Because Summer’s parents have been called back to Japan to provide care for elderly relatives, Summer and her grandparents will have to work extra hard to ensure that payments on the mortgage, always a concern for Summer’s temporarily absent parents, continue to be made regularly.

Summer and her family leave their home in Kansas for their first job of the season, in Texas. The job is large and challenging, as are Summer’s various responsibilities: to keep up with her homework, to help take care of Jaz, and to help Obaachan in the regular preparation and serving of meals for the large work crew. Her situation is complicated by her growing crush on the Parkers’ son Robbie, who gives her her first kiss, and by the misadventures of her rambunctious but loving dog Thunder.

As time in Texas passes, a combination of circumstances forces the Parkers to split the work crew in two. Part of the team remains in Texas to finish the job there, while the other part is sent to Oklahoma to start work on another job. Summer and her family go with the Oklahoma group, where the pressure of getting another large job completed on deadline gets to Jiichan, and he has to stop work in order to rest. Faced with the possibility of her family losing necessary income, Summer is forced to overcome her fears and take over Jiichan’s position in the crew. At first she makes a couple of important - but potentially very troublesome - mistakes, but with the help of a friendly crew member and as a result of her own determination, Summer is able to compensate for those mistakes and assist in the completion of the job in a way that, at the beginning of the novel, she never thought would be possible.

More summaries and resources for teaching or studying The Thing About Luck.

The Thing About Luck from BookRags. (c)2022 BookRags, Inc. All rights reserved.